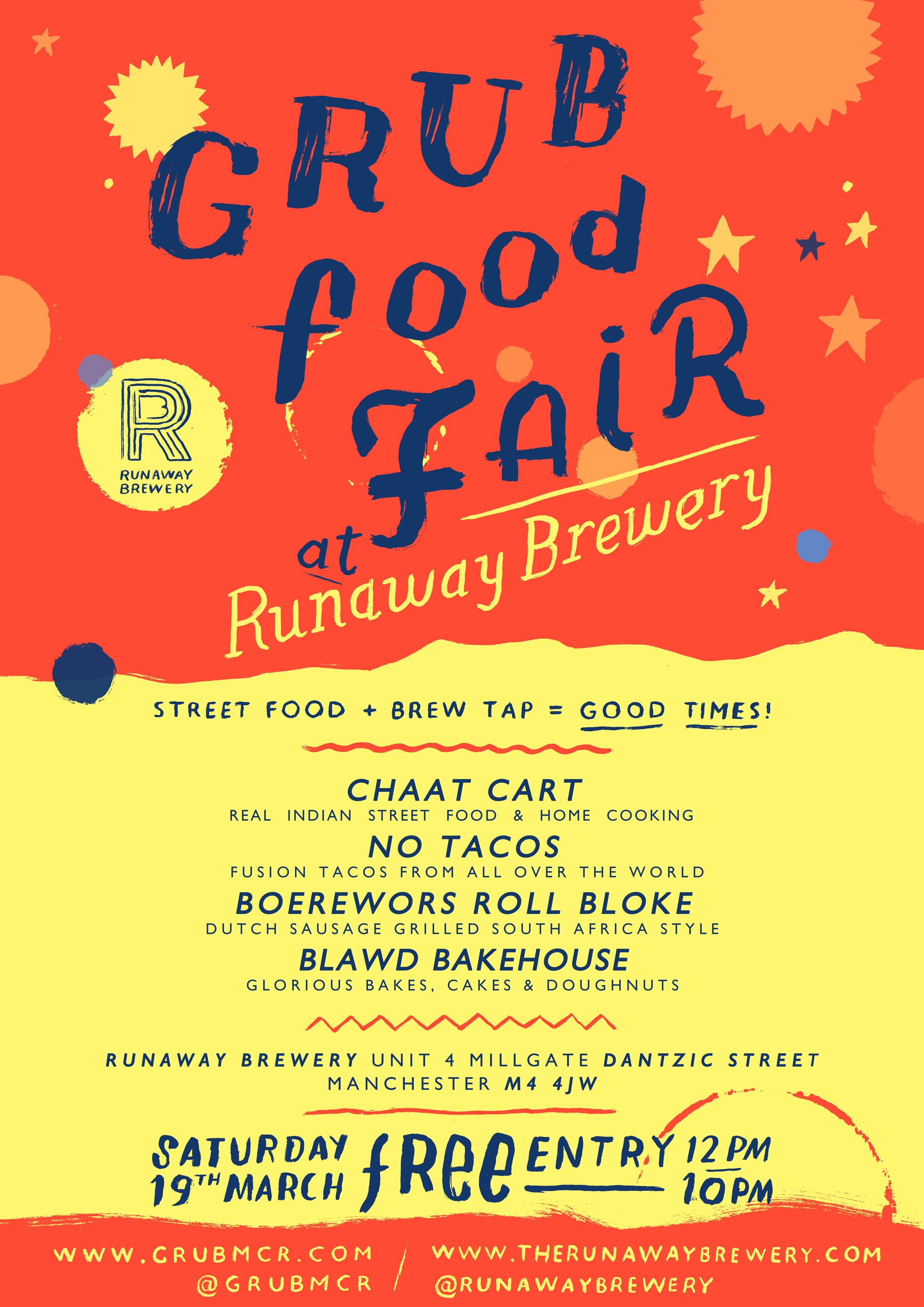 All the action will be taking place within Runaway Brewery itself in the heart of the Green Quarter just a stones throw from The Marble Arch pub, Manchester VictoriaStation& the newly opened Exchange Square tram stop this Saturday 19th March.

The aim of the event is to bring together the high quality range of independent street food traders who are a key part of GRUB events along with the amazing atmosphere and freshest ales associated with the growing popularity of Manchester brew taps.

Street food traders include Boerewors Bloke (tradiEonal Dutch sausage grilled South Africa style), No Tacos (brand new trader serving up fusion tacos mixing up world cuisine with the classic Mexican street snack), Chaat Cart (real Indian street food specialising in dosa) and Blawd Co (amazing bakehouse dishing out modern doughnuts, bakes and cakes currently supplying Common Bar, Rapha & North Tea Power).
As can be expected in a brewery Runaway Brewery will be supplying an array of their beers fresh from the tanks including their IPA and Pale Ale which are firm Manchester favourites alongside a number of specials. On top of the beer offering there will also be a second bar serving up great wine, spirits, ciders and soY drinks.
Whilst guests enjoy the cracking food and drink they’ll also be listening to some of Manchester’s best alternaEve DJs playing soul, funk, folk, psychedelia and plenty more.
The event will be free entry and will take place at The Runaway Brewery, Unit 4 Millgate, Dantzic Street, Manchester, M4 4JW.
Jason Bailey, director of GRUB said “It’s a fantasEc feeling to finally have a space where we can grow an event month aYer month, not only that but we’re stoked to be working with one of Manchester’s best brewers. We believe this has the potenEal to be great for Manchester’s food and drink scene but more importantly add another exciEng element to this growing community in Angel Meadow & The Green Quarter”

Darren Clayson, director at The Runaway Brewery said ”We are really excited to be involved in the growing brew tap scene in Manchester. Working with our friends at GRUB and their fantasEc street food traders makes this an even be]er event and something really novel in the UK which we are proud to be a part of.”

Cast announced for Black British retelling of ‘The Wiz’ at Hope Mill Theatre...