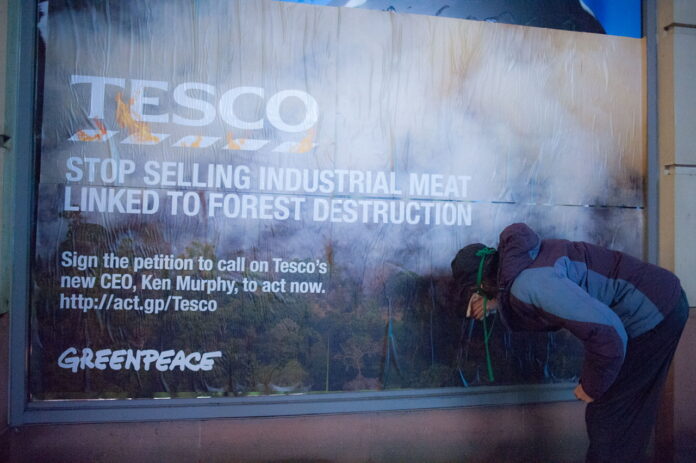 Posters appeared on the windows of the Tesco on Market Street, Manchester, exposing how Tesco sells industrial meat linked to forest destruction.

The Manchester store was targeted as part of a national campaign by Greenpeace that has seen dozens of Tesco stores re-branded across the UK this weekend.

The posters were accompanied by a letter from Greenpeace UK Executive Director John Sauven, to make sure that the new Global CEO Ken Murphy gets the message that customers want Tesco to drop forest destroyers from their supply chains and reduce the amount of meat they sell by at least half – starting from phasing out industrial meat.

Martin Porter from Glossop said, “The shocking image of the rainforest being burnt to clear land for industrial meat should inspire anyone who has the power to act to save the Amazon. Tesco’s new CEO Ken Murphy is someone who can do something to help end this tragedy. Tesco must stop buying animal feed from forest destroyers and stop selling industrial meat.’’
This year, the fire season in the Amazon has kicked off with worrying intensity, with the highest number recorded in August since 2007.

Many fires which are destroying the Amazon and other forests are started deliberately to clear land to graze cattle or grow soya. Protecting the Amazon is essential in order to avoid catastrophic climate change, protect the homes of indigenous people and wildlife, and reduce the risk of future pandemics.

Tesco promised to end its part in deforestation for commodities such as soya by 2020, but in 2018 it quietly changed that goal to 2025 and still has not published a credible plan to show how this will be achieved. Much of the chicken and pork on its shelves is fed on Brazilian soya, and produced by companies owned by JBS, the world’s biggest meat packing company, which has been repeatedly linked to deforestation in the Amazon , as well as human rights violations .

Martin continued, “The Amazon may be more than 5000 miles away, but I doubt there can be many people in Manchester who don’t know it is one of the most important eco-systems in the world. The products in our local Tesco, and on our plates, are fuelling its destruction. I eat less meat now because I cannot keep eating food that I know contributes to the climate emergency. People can help by cutting out meat, whether it’s for a mealtime, or a lifetime, and by signing the Greenpeace petition.’