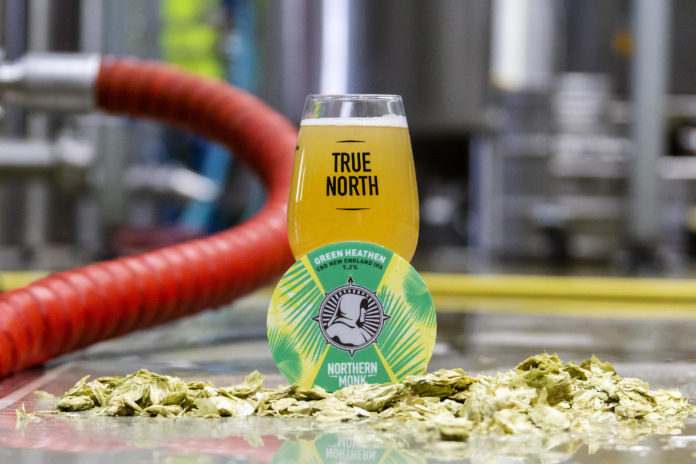 The partnership brings together an internally renowned, award-winning brewery, and a CBD specialist at the forefront of its field, to create a truly unique beer experience.

Named Green Heathen, a twist on Northern Monk’s core range beer, Heathen, this 7.2% IPA boasts 10mg CBD (cannabidiol) per pint, a legal and highly popular supplement derived from the cannabis plant, that’s currently used by over 250,000 people in the UK to improve general health and wellbeing.

Set to launch in keg nationwide on Friday 5th July, Green Heathen will be the second cannabis beer to be added to Green Times Brewing’s speciality range, the brainchild of Directors Thierry Florrit and Carl Boon. It follows on from High Flyer, the UK’s first session IPA with cannabis oil, which launched in September 2018.

Both Green Heathen and High Flyer use a unique water-soluble CBD formulation which is exclusive to the brand and sourced from sister company CBD Ultra, a CBD retailer well-known for producing innovative, market leading CBD products.

As both CBD and hops originate from the same plant family, they are symbiotic by nature. Green Heathen boasts a broad-spectrum CBD oil, so it’s jam-packed with a range of naturally occurring terpenoids, cannabinoids and flavonoids. Expect soft, resinous, tropical flavours from this twist on Northern Monk’s flagship New England IPA.

Northern Monk focus on using a progressive approach to ingredients and techniques, pushing the boundaries of traditional brewing within their Core, Twist, Seasonal and Patrons Project ranges. Northern Monk’s ‘Twist’ series is made up of limited-edition variations of their Core and Seasonal beers, Green Heathen follows in the footsteps of releases such as Double Heathen and Mango Lassi Heathen.

Although Green Heathen will receive merits for its unique flavour profile and ingredients, there’s also science that consolidates the value of mixing CBD with alcohol. It’s possible that by boosting liver function, CBD can help the liver process alcohol more effectively, thus reducing hangovers. CBD and cannabis also have well-researched anti-inflammatory effects, which may counter the inflammatory effects of alcohol.

“We are honoured to be collaborating with Northern Monk on the second cannabis beer in our series. For more than 10,000 years, both beer and cannabis have been used to enhance both health and mood and so a cannabis infused beer really is a perfect partnership.

Northern Monk is also a well-respected brewery with global reach and we really like their ethos of collaborating with other businesses to help strengthen the North for positive change. We are very proud of Green Heathen and based on the success of High Flyer, we expect this beer to fly off the shelves.”

“We always aim to be progressive in our approach to brewing,and we believe that CBD has real, tangible health benefits. The collaboration with Green Times Brewing gave us the opportunity to brew a groundbreaking beer. Above all, we really enjoy creating twists on our Core range beers, and pushing the boundaries of our existing recipes. Green Heathen does just that.”

Trade customers can purchase kegs direct from Northern Monk by emailing drink@northernmonk.com. Please note: This beer is available in keg only and won’t be available in can.