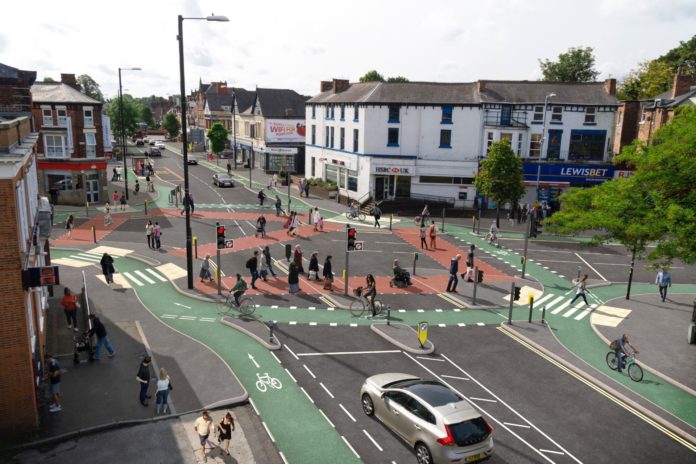 First presented at the Traffic Signal Symposium in September 2018, the junction design approach – named Cycle Optimised Protected Signals – or CYCLOPS – maximises the opportunities for safe cycling and walking whilst optimising the overall junction performance for all transport modes.

The principle feature of a CYCLOPS junction is an orbital cycle route separating cyclists from motor traffic, reducing the possibility of collisions or conflicts. People on foot are also able to get exactly where they want to be in fewer stages with more space to wait than on other junction designs.

The junctions will be a key feature of Greater Manchester’s Bee Network, a plan to deliver the UK’s largest cycling and walking network, headed up by Commissioner Chris Boardman. The first locations in the city-region to install a CYCLOPS junction will likely be Bolton and Hulme, South Manchester.

“Junctions are where most collisions occur and can be a scary experience for people travelling without cars. If people are faced with one or more of these stressful experiences on a journey, in many cases, they simply opt to jump in the car, so tackling this is a top priority. Our traffic engineers have come up with a world-leading junction design that will be introduced in towns and cities not only across the UK but abroad too.

“The CYCLOPS approach makes foot and bike travel far safer and more direct without disrupting other modes. It is frankly genius and we’ll soon be wondering why we ever did anything else. I can’t wait to see the first one installed in Greater Manchester.”

The approach is likely to be adopted by several other UK cities including Cambridge and Aberdeen who are progressing plans based on the Greater Manchester CYCLOPS design template.

Internationally, the approach has been recognised by Skye Duncan who is the Director of the Global Designing Cities Initiative and responsible for the Global Streets Design Guide.  Skye said:

“It is great to see Greater Manchester embrace the concept of protected intersections for cyclists. This is a new global approach to design and each country is finding its own way to deliver them. We are particularly excited that the Greater Manchester approach allows for diagonal movement for people walking and protection for their cyclists where they need it most.

“It is great to see that Greater Manchester has not just signed up to use the Global Street Design Guide but is actively developing plans to deliver on the measures we promote to put pedestrians and cyclists first, placing them amongst cities who are leading the way for best practice street design”

Current UK junction designs typically position people on bikes in the nearside of the lane, allowing vehicles to pass on their offside. This can cause so-called ‘left hook’ incidents, where cyclists going ahead are struck by a vehicle turning left from the same lane.

Shots fired at a house in Fallowfield

First UK stage adaptation of Ernest Hemingway’s A Farewell To Arms to open at...