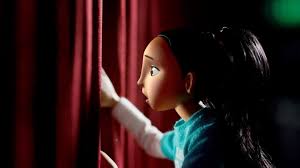 BBC One launched its 2017 short film The Supporting Act that will run throughout the Christmas period on the channel.

So far the film has received critical acclaim and been liked 90,000 times on Twitter and re-tweeted 35,500 times. It has been viewed 15 million times on Facebook.

Today the BBC Director-General, Tony Hall referenced the contribution of Greater Manchester to the film’s success in a speech to the 2017 Children’s Global Media Summit taking place at Manchester Central. He said:

“[The film is] a brilliant marriage of storytelling, creativity, and tech… And, by the way, those characters and their wonderful world were made here in Manchester. We’re really proud of what we do in this city – and with this city.”

Heavily involved in the production of the film were Greater Manchester companies MacKinnon & Saunders who created the puppets, and Clockwork Frog Films who designed and built the set.

The two minute film follows a 10-year-old girl who practices day in and day out to give the most important dance performance of her life. Her dad is always with her but he’s busy, and getting even busier as Christmas approaches. He remains distracted up until the moment that really matters, when father and daughter come together in a wonderful moment of ‘oneness’.

Elliot Dear from Blinkink says: “The story is about an emotional connection between a girl and her dad. We wanted to make a film that had the charming, handmade qualities of stop-motion animation, the tiny imperfections that let you know it’s been done for real. The aim was to combine this with CG animation, which we used for the faces, in order to capture the tiny nuances of human facial expressions, enabling the characters to be very emotive without the use of dialogue.”

Announcing the final Thunder Girl – Carol Harrison stars as ‘Chrissie’ in The Thunder...