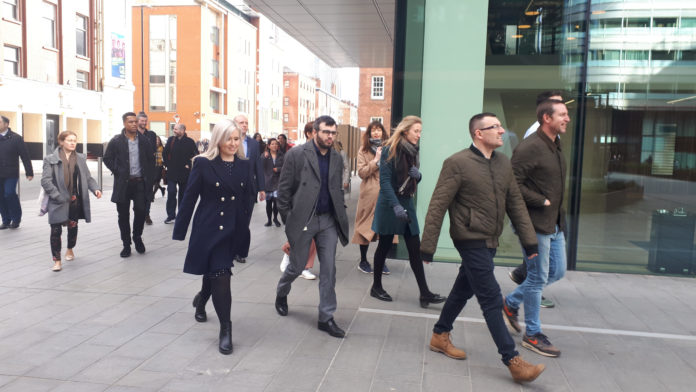 More than 350 primary schools across Greater Manchester have introduced physical movement as an everyday part of their pupils’ lives with 154 doing so over the past 12 months.

The figure has been announced as Greater Manchester celebrates the first anniversary of its commitment to become the world’s first Daily Mile city-region. It means that three new schools a week have got involved in the Daily Mile since Mayor Andy Burnham announced the city region’s ambition.

The Daily Mile™ Children Fit For Life initiative is backed by a range of government departments and agencies and aims to improve outcomes for children and young people through embedding consistent physical movement into a daily routine. 42% of Greater Manchester’s primary schools are now taking part. Meanwhile the Fit For Life programme is targeted at adults.

Sara Tomkins, CEO of GreaterSport said: “It’s fantastic to see so many extra schools and nurseries taking part in the Daily Mile, and now our first businesses too. But with 6 in 10 Greater Manchester children and 1 in 3 working adults not doing the recommended amount of activity each day, there’s still more to do to ensure our children and adults alike remain happy and healthy.”

As well as supporting 75% of the city region’s schools to join in The Daily Mile by 2021, this investment aims to extend the benefits of daily movement across the population, including by creating workplaces that are more active.

Mayor of Greater Manchester Andy Burnham, the city region Walking and Cycling Commissioner Chris Boardman and The Daily Mile founder Elaine Wyllie visited the city centre office to join HSBC staff on their walk, and call on more Greater Manchester businesses to get on board and support workers to walk for 15 minutes a day.

Mayor Andy Burnham said: “It’s inspiring that so many of our schools and nurseries have embraced the Daily Mile, encouraging more and more children to make consistent daily walking a natural part of their day. Today, I challenge businesses across our great sporting city-region to follow in their footsteps. By making time, creating opportunity and positively encouraging their staff to walk more, employers can make a valuable contribution to improving the health, wealth and well-being of our city-region.”

Chris Boardman added: “50% of adults in Greater Manchester are currently inactive and an astonishing 30% of trips taken in the car are under 1km which is an equivalent walking time of just 15 minutes. We want to see more people making short trips by foot and we’re asking businesses to help us to normalise walking by signing up to a daily mile commitment.”

Getting more people to consider sustainable travel options is also a key objective for Transport for Greater Manchester (TfGM). Last year the Mayor launched the Greater Manchester Congestion Deal, which laid out a series of short to long-term measures aimed at reducing congestion on the region’s roads.

Peter Boulton, TfGM’s Head of Highways, said: “Congestion is currently a major issue affecting the long-term economic potential of the city region as well as the health of its residents.

“While there are many factors that cause congestion, two of the most obvious are the number of journeys made at peak times by vehicles carrying only one occupant and those that travel short distances by car for say, a school run.

“Schemes like the Daily Mile are fantastic in encouraging more people, especially young people, to think differently about how they travel. Just simple things like walking to school or work can make a big difference to congestion and an even bigger difference to people’s health.”

Sam Roden, Manchester Business Banking Area Director for HSBC UK said: “Too many people work all day without a break, eating their lunch at their desk and not taking time away from a screen. Walking is great for your physical and mental wellbeing, and also leads to greater productivity. I’m passionate about The Daily Mile and proud to be leading the introduction of this important initiative with Manchester’s business community.”

Lockdown is changing the way that the UK drinks at both ends of the...