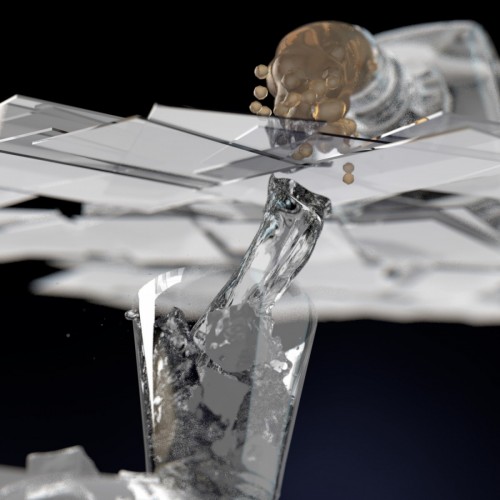 Manchester’s miracle substance is in the headlines as Manchester scientists have used a graphene water filter to turn whisky clear.

Previously graphene-oxide membranes were shown to be completely impermeable to all solvents except for water. However, a study published in Nature Materials, now shows that we can tailor the molecules that pass through these membranes by simply making them ultrathin.

The research team led by Professor Rahul Nair at the National Graphene Institute and School of Chemical Engineering and Analytical Science at The University of Manchester tailored this membrane to allow all solvents to pass through but without compromising it’s ability to sieve out the smallest of particles.

In the newly developed ultrathin membranes, graphene-oxide sheets are assembled in such a way that pinholes formed during the assembly are interconnected by graphene nanochannels, which produces an atomic-scale sieve allowing the large flow of solvents through the membrane.

In the newly developed ultrathin membranes, graphene-oxide sheets are assembled in such a way that pinholes formed during the assembly are interconnected by graphene nanochannels, which produces an atomic-scale sieve allowing the large flow of solvents through the membrane.

Prof. Nair said, “Just for a fun, we even filtered whisky and cognac through the graphene-oxide membrane. The membrane allowed the alcohol to pass through but removed the larger molecules, which gives the amber colour. The clear whisky smells similar to the original whisky but we are not allowed to drink it in the lab, however it was a funny Friday night experiment!”

The newly developed membranes not only filter out small molecules but it boosts the filtration efficiency by increasing the solvent flow rate.

Dr. Su, who led the experiment added “The developed membranes are not only useful for filtering alcohol, but the precise sieve size and high flux open new opportunity to separate molecules from different organic solvents for chemical and pharmaceutical industries. This development is particularly important because most of the existing polymer-based membranes are unstable in organic solvents whereas the developed graphene-oxide membrane is highly stable.”

Graphene-oxide membranes developed at the National Graphene Institute have attracted widespread attention for water filtration and desalination applications, providing a potential solution to the water scarcity.

By using ultra-thin membranes, this is the first clear-cut experiment to show how other solvents can be filtered out, proving that there is potential for organic solvent nanofiltration.

Graphene- the world’s first two-dimensional material is known for its versatile superlatives, it can be both hydrophobic and hydrophilic, stronger than steel, flexible, bendable and one million times thinner than a human hair.

This research has changed the perception of what graphene-oxide membranes are capable of and how we can use them. By being able to design these membranes to filter specific molecules or solvents, it opens up new potential uses that have previously not been explored.