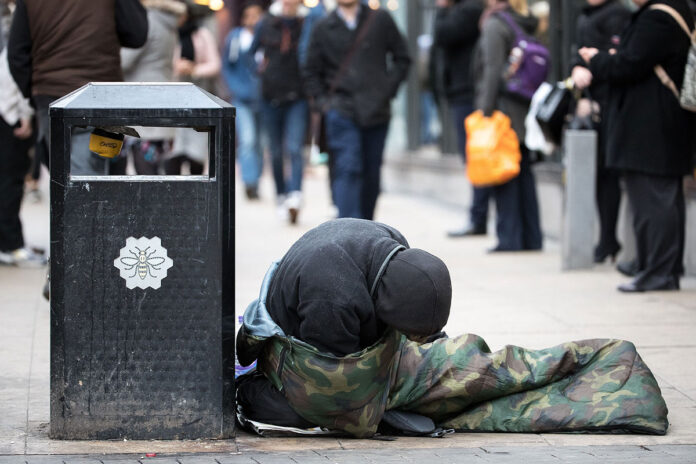 A new Salvation Army report outlines how homelessness and rough sleeping will soar if the Government fails to properly fund homelessness support services in this Autumn’s Comprehensive Spending Review (CSR).

The church and charity is warning that the economic consequences of the pandemic will increase rough sleeping and force families into expensive and unsuitable temporary accommodation, like bed and breakfast, as local authorities struggle to manage rising homelessness levels with urban areas likely to be worst affected. In May 2020 Government figures showed that 14,610 people were housed in emergency accommodation in England who were either at risk of rough sleeping or were already doing so.

And a recent snapshot survey conducted by local authorities in April 2020 estimated that 6,000 people were rough sleeping at the outbreak of the pandemic. This is over 40% more than was recorded in the 2019 official rough sleeping count, which offered a similar snapshot estimate of the number of people rough sleeping in England[

However, the report, ‘Future-Proof the Roof’ offers solutions to help sustain the amazing progress that’s been made in recent months, while helping to prevent growing rates of rough sleeping and homelessness in the future. Not only would this protect thousands of vulnerable people but investing in homelessness now will avoid spiralling costs in the future. Typical avoidable costs include expensive temporary accommodation, which just last year cost local authorities close to £1billion.

In July, the Government outlined how it would prioritise spending its approach to this Autumn’s  CSR. The Salvation Army is concerned that the ‘tough choices’ rhetoric used in the announcement could mean that homelessness and rough sleeping services suffer from funding cuts, similar to those made by the damaging austerity budget of 2010.

Lorrita Johnson, has The Salvation Army’s newly appointed Director of Homelessness Services, said: “It’s not too late to stop a massive increase in homelessness and rough sleeping caused by the current economic downturn. Bold government moves like the furlough scheme, temporary protection from eviction and emergency accommodation for rough sleepers saved lives and ensured thousands still had a home. However, our report demonstrates that if the Government mirrors the austerity approach it took during the last economic crisis, there will be dire consequences for rough sleepers, private renters and the economy as a whole.

The Salvation Army, which has more than 150 years’ experience of working with people experiencing rough sleeping and homelessness, is calling for a new approach to sustained, long-term investment to help people off the streets for good and increase the supply of homes available.

Lorrita Johnson continued “The only way to prevent a homelessness and rough sleeping crisis is to approach funding for homelessness services in the same way the Government funds physical infrastructure and invest for the future. If the Government was planning a new motorway, it would invest in proper planning and construction materials to ensure it was still safe to drive in the future.  It would be the only way to protect drivers and avoid costly emergency repair bills. If they took the same approach to investing in homelessness, they would protect lives and avoid potentially large out-of-budget expenses for temporary accommodation and health services. Future-proofing investment protects people and saves money.”

“Our report ‘Future-Proof the Roof’ outlines alternatives to the austerity measures that came into force post 2010 and could be reintroduced following the upcoming spending review. If they act now, the Government will protect thousands of people from either returning to the streets and prevent many children being raised in cramped and unhealthy temporary accommodation.”

Event to ask what is the media obsession with Moors Murders?