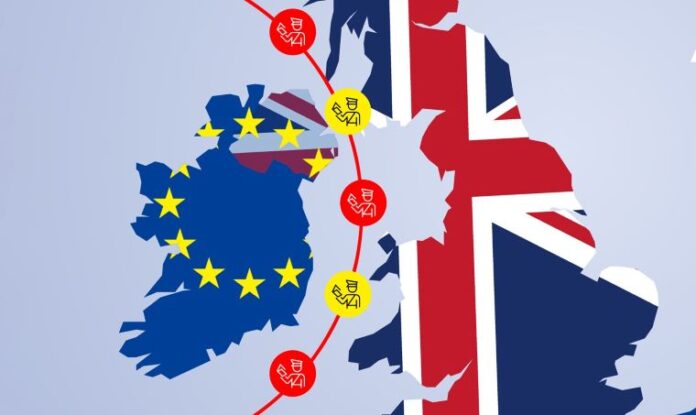 The foreign Secretary has set out the steps the country will take to try to break the deadlock with the European Union on post-Brexit trade with Northern Ireland.

In a statement to parliament this lunchtime, Liz Truss outlined a new law that would effectively override parts of a deal signed with the EU at the end of 2020 ,so-called Northern Ireland protocol, which effectively created a customs border in the sea between the province and the rest of the United Kingdom.

She told MP’s that the planned legislation that would ease the movement of goods, apply Britain’s tax regime in Northern Ireland and hand London more say over the laws governing the province adding that it would not break international law and would not be brought in immediately, underlining the British government’s desire to press on with talks with Brussels in parallel to try to find a negotiated solution.

“I am announcing our intention to introduce legislation in the coming weeks to make changes to the protocol,” Truss told parliament to jeers from the opposition.

“Our preference remains a negotiated solution with the EU and in parallel with the legislation being introduced, we remain open to further talks.”

The move to outline the legislation, which foresees a “green channel” for those goods only moving from Britain to Northern Ireland and no further, was approved by Johnson’s cabinet team of top ministers.

Maroš Šefčovič, the European Commisison vice-president in charge of Brexit negotiations for the EU, has issued a response to the Truss statement. In it he stresses the EU’s desire to reach a negotiated settlement with the UK on changes to the Northern Ireland protocol, and says “the potential of the flexibilities” proposed by the EU have “yet to be fully explored”.

But Šefčovič says the UK plan to ignore parts of the protocol “raises significant concerns”. If the UK goes ahead with this, Brussels will respond “with all measures at its disposal”, he says.

He told the House of Commons: “The right response to these challenges cannot simply be to breach our commitments. It is deeply troubling for the Foreign Secretary to be proposing a Bill to apparently break the treaty that the Government itself signed just two years ago.

“That will not resolve issues in Northern Ireland in the long term and rather it will undermine trust and make a breakthrough more difficult.

“It would drive a downward spiral in our relationship with the EU that will have damaging consequences for British businesses and consumers.”

“Politicians everywhere should be focussed on helping the most vulnerable in society amid the worst cost of living crisis in decades. Firms are already reeling from the rising cost of doing business. The last thing they want is further uncertainty in trading arrangements amid global supply chain challenges.

“Now more than ever, flexibility and compromise are needed from both sides to reach lasting trade solutions, securing peace and prosperity.

“With good political will a landing zone can undoubtedly be found so that GB-NI trade flows are smoothed.”

Revealed: a plan for the North to take control of its own economy