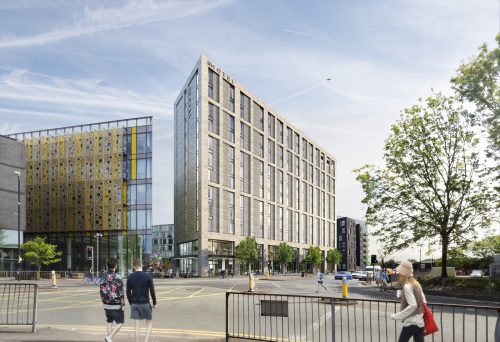 Planning permission has been granted for an impressive new 12 storey, 212-bedroom hybrid-hotel scheme that will be located in a popular part of Great Ancoats Street, in the New Islington area of Manchester city centre.

Award winning Yorkshire-based property and development company S Harrison, secured the planning permission and negotiated a 20-year lease with international hotel group Meininger, which will open its first hotel in the north of England by January 2022, creating more than 20 full time jobs.

Offering 785 beds in total, in a mix of rooms including classic doubles, private multiple-bed rooms and dormitories.  There will also be a reception, lobby, lounge, breakfast room, and bar, as well as a guest kitchen and a games zone. The hotel will have four disabled parking bays on site and a secure cycle store. It will be located between the 20,000 sq ft Fabrica office building and X1’s The Plaza apartment scheme.

S Harrison’s managing director, Ann Scott, said: “Like Meininger, it’s our first scheme in Manchester. Attracting a unique operator like Meininger, and building a superb new hotel on such a prominent site, will deliver the last piece of development on this remaining parcel of land between the Fabrica office building to the North and residential developments to the South.

“This site, which is just a 10-minute walk from Manchester Piccadilly station, is ideally suited to a hotel provider, and our considered and planned approach has bought a new type of hotel to the city that will ultimately benefit the local economy.”

S Harrison has recently partnered with 42nd Street, a local charitable organisation on Great Ancoats Street that helps young people with their mental health. Lino print designs, created by young people attending their workshops, have been included in the company’s advent calendar this year.

Ann added: “We are looking forward to building on our relationship with 42nd Street and really value the work that they do in this part of the city, providing a safe and creative space for young people to build on their emotional wellbeing and mental health.”

German owned Meininger has 29 hotels in 17 European cities and opened its first UK hotel in London’s Hyde Park in 2006. It has plans to open another hotel in the north in Liverpool as well as at other UK sites including Belfast, Cambridge, Glasgow, and Edinburgh.