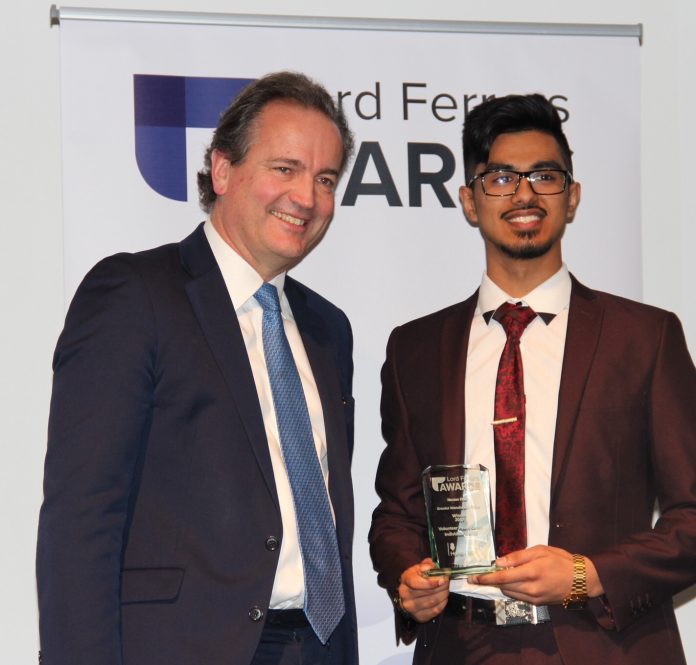 A GMP Volunteer Police Cadet (VPC) has received a national award, recognising his work mentoring and educating cadets about tolerance and integration in inner city Manchester.

Hassan Khan, a cadet with Blackley VPC Group was presented with the Lord Ferrers Individual Volunteer Cadet award by Nick Hurd MP, Minister of State for Policing and the Fire Service.

He said: “I feel very proud to be a Volunteer Police Cadet and part of the GMP team. Receiving this award is an honour and further motivation to continue the work that I believe makes a real difference within local communities.”

“I am delighted to award both Hassan Khan and the Trafford Council for the vital contribution they have made to Greater Manchester police and the local community.

“I want to thank every single nominee for all that they do for their communities and the efforts they make to keep us all safe.”

Playing a key role within the community over the last five years, Hassan has helped educate people in Blackley around issues such as hate crime and antisocial behaviour, breaking down barriers and reducing conflict in the community.

He also supports his peers through Cadet mentoring and development and has organised many events, including leading a group of Cadets on their Bronze Duke of Edinburgh (DofE) Award, which will in turn enable Hassan to achieve his Gold DofE Award.

Greater Manchester Police Assistant Chief Constable Rob Potts also attended the event and said: “I am delighted for Hassan and the award is testament to the incredible work he does in the community.

“Volunteers play a fundamental role in the community, complimenting GMP’s public services and Hassan is an inspiration to us all.”

The awards also saw Trafford Council recognised and named winners of the Employer Supported Policing (ESP) Award, open to organisations that support their employees to volunteer in policing.

GMP nominated the Council for its commitment to register on the scheme and providing ten days extra paid holiday for staff volunteering for police duties or training.

Promoted throughout the Council the ESP scheme has seen five members of staff recruited as Special Constables with more currently involved in the recruitment process.

Joanne Hyde, Trafford Council, Corporate Director Transformation and Resources said: “The Council is incredibly proud to have won the employer supported policing (ESP) award at this year’s Lord Ferrers Awards. ESP is a partnership that benefits employers, their staff and the police service, and we’re pleased to have been able to encourage more staff to get involved and provide vital help for their local communities.”