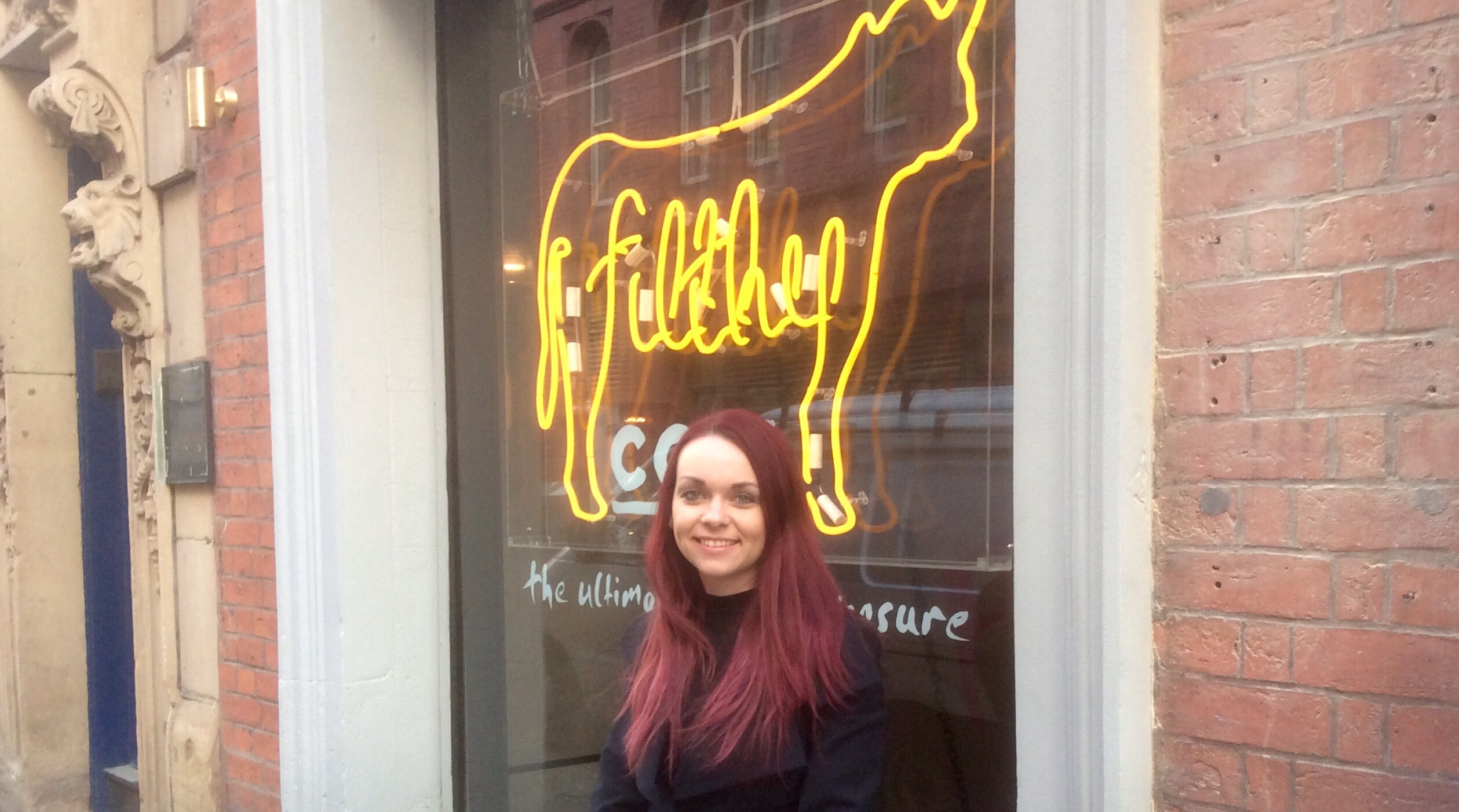 Manchester has its fair share of burger restaurants and soon it will have another.About Manchester spoke to Jordan Gallimore who at the age of just twenty three hopes that her Filthy Cow eatery on Tib Lane will be the first of many.

Deciding on the name was one of Jordan’s worst experiences in this new venture.She was for a time, too embarrassed to tell her grandmother and the neighbors weren’t taken to having a van with Filthy Cow written in blood parked in the leafy suburbs but little it appears stands in the way of Jordan’s ambition.

Deciding that training to be an accountant at the age of eighteen, the girl with the bright academic future with A levels in Maths, Further Maths and Physics, decided that a career of number crunching wasn’t for her and instead she followed her heart.She had worked part time in hotels waitressing while studying and had caught the foodie bug as she travelled round the world with her family.

Fourteen months go, she thought about her “go to dish” of burger and fries and the idea incubated about bringing something a little different to Manchester, serving a burger, fries and a soft drink for £10 to people of her age group, who have just graduated from university with not so much disposable income to go out and enjoy themselves.

She gave up her job, moved to London, working in a chain of burger bars, while living in a hostel Her parents were surprised but did nothing to discourage and she returned to Manchester working in numerous restaurants trying to pick up as much of a broad experience of the trade as possible.She ended up working in Sam’s Chop House for a month for free and she can’t thank them enough for giving her the experience and taking her seriously.

She had brought in a development chef, working with him putting the menu together.It has been hands on for Jordan, how to press the beef, slice the tomato and cut the lettuce and together they created a training manual.The chef will stay with Filthy Cow for a month, passing on his skills to trainee chefs.

The scheme has been backed by silent partners, who have been working away in the background.They are confident in Jordan’s ability despite her age and lack of experience.”I don’t do things by halves” she tells us.

She has considered the threats, the fact that Manchester is going through a burger resurgence at the moment, but that is no barrier to her.It is whether she can change people’s initial perceptions once they have walked in through the door.

As for the restaurant itself, the emphasis, she says, in on convenience .If you so wish you can takeaway, all the food is wrapped in disposable packaging. Jordan is adamant that Filthy Cow is not a destination venue.

Filthy Cow will “will set the benchmark for memorable dining in Manchester, with creamy milkshakes, local craft beers and weekly-changing wines from small independent local producers. These will accompany the main event and are served alongside rustic ‘skin on’ chips, authentic ‘slaw’ and onion rings……. It’s interior design is farmyard-industrial crossed with Soho-neon.

Her dream is expansion, Filthy Cow burger restuarants across the North Of England.Has she any doubts? None at all-I’m confident that it will be a success.

And her advice to people of her own age group thinking about going down the university route.Think twice, you can do a lot in three years.

The manual a Prime Minister needs to pick up