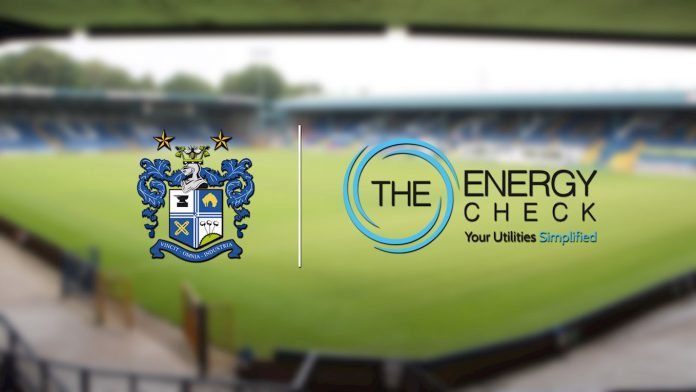 Gigg Lane will now be known as The Energy Check Stadium at Gigg lane after the club signed a record breaking, multi-year deal.

The Energy Check’s CEO David Winton commented “We are delighted to be partnered with Bury FC as the Official Stadium Sponsor. The Stadium has been here since the club formed back in 1885 and is steeped in history so it is with great pride we are associated with this venue and this brilliant club.

For the fans who may not know us, we are an International Energy Consultancy, focused on the commercial and domestic markets in the UK, ROI, France and the U.S.A. Our aim is simple, to reduce our customer’s energy consumption, carbon footprint and energy costs.

We look forward to seeing the team succeed this season and beyond, Up the Shakers!!””

As part of the agreement, The Energy Check will be working closely with the club over the coming years to deliver energy reductions through behavioural changes, energy efficiency measures and renewable energy technology. The Partnership will also concentrate on providing a service to the fans and will look to incentivise energy switching via the business.

Bury FC Chairman Stewart Day spoke of his delight on the new deal “I am delighted that we have agreed on a deal with The Energy Check on our Stadium, Karl Evans and Matt Caren have worked extremely hard in getting another record breaking deal for the club and it just once again shows the progression we are making both on and off the field. There are a number of other exciting new Partnership deals to be announced shortly and this will help ourselves continue to grow as we look to have a successful season.