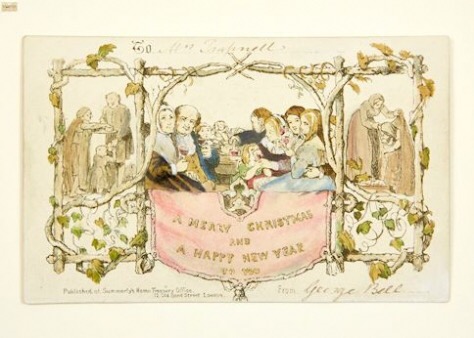 From walking Christmas puddings to fluffy puppies, the Christmas cards in Manchester Metropolitan University’s Laura Seddon collection reflect the strange and sentimental mores of the Victorians.

Included in the collection are three versions of the first commercially produced Christmas card to appear in England, which was printed in 1843.

This was the card designed by JC Horsley in 1843 for Henry Cole, known to collectors as the Cole-Horsley card. Cole, who was later knighted for his public work, notably for the Great Exhibition of 1851 and for South Kensington Museum, published the card at Felix Summerly’s Home Office, an enterprise he had started to produce children’s books and toys.

A thousand copies were lithographed, coloured by hand and sold for a shilling each, a very high price at the time when a labourer might earn little more for a day’s hard work.

It took more than 20 years for the idea of sending Christmas cards to supersede the much larger Valentines market, and Christmas card makers in the 1870s took their inspiration from their romantic designs, using lace edging and other embellishments.

Some cards were gilded in the manner of mediaeval manuscripts and racing and hunting scenes were popular, especially those showing an unfortunate rider coming to grief.

Other cards were humorous. The verse on one warns about overeating: “Aye here it comes, your Christmas treat!/You may well shout with laughter/But see you don’t too freely eat/Or pills may follow after.

Laura Seddon collected tens of thousands of Victorian and Edwardian cards, including Christmas, Valentine and other greeting cards.

She was inspired by the collector Harry Page, whose books of Victorian ephemera are also held by MMU Special Collections. Seddon was named as an Honorary fellow of the University in 1992, in honour of her work compiling the collection.