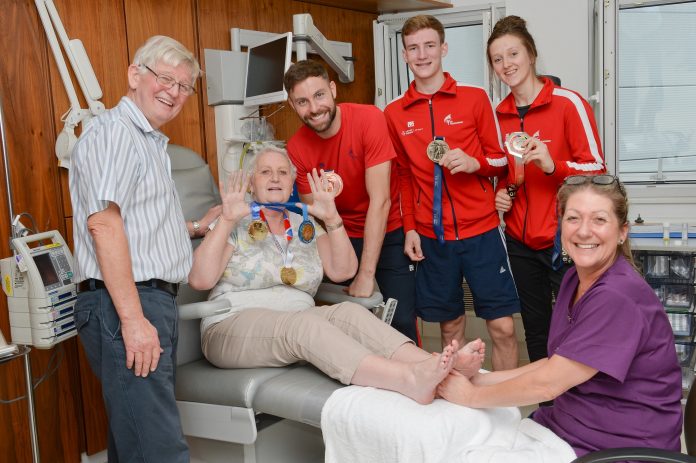 Athletes from GB Taekwondo delighted patients and staff at The Christie Private Care, part of HCA Healthcare UK, and The Christie NHS Foundation Trust by dropping by to show-off some of their winning moves, as well as their expansive medal collection including gold, silver and bronze from 2016 Rio Olympics and a selection from this year’s European Championships.

The team of 11 athletes, which included Olympian Mahama Cho, Para Taekwondo World Champion Amy Truesdale and two-time World Championship medallist Damon Sansum, in addition to the demonstration of ‘kicks’ and rules of the sport, chatted with a range of patients, including those in for chemotherapy treatment, their family members and staff, handed out cupcakes, signed autographs and posed for selfies.

GB Taekwondo’s senior and junior athletes train at the National Taekwondo Centre in Newton Heath, Manchester. The team also use the facilities at The Manchester Institute of Health & Performance (MIHP) which is a sister facility of The Christie Private Care and operated by HCA Healthcare UK.

Chief Operating Officer at The Christie Private Care, Natasha Young, said: “We’re delighted that so many of the GB Taekwondo team took time out of their busy training schedule to meet some of our patients and their families, as well as members of staff. It’s fantastic that we have such a high number of successful athletes based here in Manchester.”

“On behalf of everyone at The Christie Private Care, I’d like to thank GB Taekwondo for coming along and helping to raise everyone’s spirits as being in hospital can be difficult and visits like this really help to make our patients’ time spent here that bit easier.”

Roger Spencer, Chief Executive at The Christie NHS Foundation Trust, added: “It was a pleasure to welcome such a talented group of sporting professionals to The Christie. We are delighted that they were able to take time out of their busy training schedules to take a tour of hospital and meet some of our patients, visitors and staff. The taekwondo demonstrations that they did were a real hit with patients.”

Nabillah Akhtar, Media and Communications Officer at GB Taekwondo, concluded: “We’re pleased to have visited today and as an organisation, it’s something we’ve wanted to do for quite a while. Our aim is to make a real difference within our local community, here in Manchester and with the hospital holding such a close link – we couldn’t wait to get involved.”