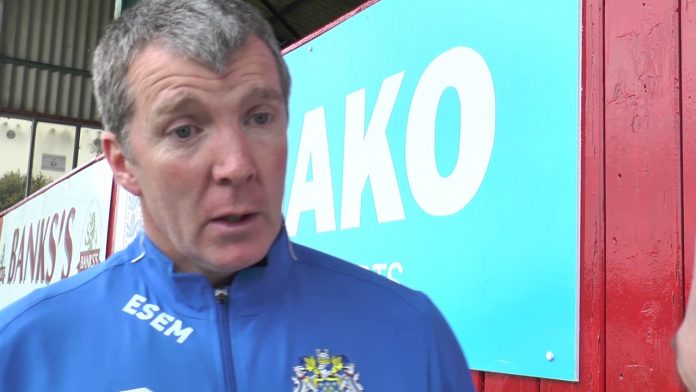 STOCKPORT County boss Jim Gannon will equal Fred Stewart tomorrow as the longest-serving manager ever to take charge of the club.

Saturday’s trip to North Ferriby United will be Jim’s 379th game in charge of the Hatters, equalling the total achieved by County’s first ever manager more than a hundred years ago.

County chairman Richard Park said: “This is an incredible achievement and on behalf of the supporters, staff, players and directors, I wish to congratulate Jim on reaching such a significant milestone.”

Jim said: “I was both surprised and humbled by the news that I am about to equal the managerial record of Fred Stewart.

“When I took over at County more than 12 years ago as a caretaker, I never expected to manage much more than a handful of games. To be manager at the time was both a great privilege and also a heavy responsibility. It still is today. For someone who lives a mile from the ground, whose family and friends are all County fans, I’m reminded everyday of what

part the club plays in the town. A football club like ours has great history, value and importance to our fans but also to the well-being across the greater community. This is a role I take seriously and try to fulfil diligently and professionally every day.

“Looking back, I’ve enjoyed some incredible moments at the club and treasure playing a part in helping build the club to heights and memories never before imaginable. I have always appreciated the respect I have received for that work, and more importantly the trust that I have been given by those that feel that I have, and will always, serve the club as best I can.”

Jim first took charge on Boxing Day 2005, with County five points adrift at the foot of League Two, but he masterminded the Great Escape, saving the club from certain relegation.

In 2007, he led County to a new Football League record of nine wins in a row without conceding a goal. The Hatters missed out on the Play-Offs by virtue of goal difference that season, but a year later won promotion to League One with a dramatic Play-Off final victory over Rochdale at Wembley.

Amidst financial turmoil, Jim was made redundant twelve months later, despite securing eight Manager of the Month nominations. The club incurred a ten-point deduction due to entering administration, but Jim still managed to lead the team to safety before leaving Edgeley Park.

After stints at Motherwell, Peterborough United and Port Vale, Jim returned to County in 2011 following the resignation of Dietmar Hamann. With the club now in the Conference National he prevented a further slide down the football pyramid.

After a highly successful spell at Northwich Victoria, and another relegation for County, Jim returned for a third stint at Edgeley Park on January 18, 2016, winning the Cheshire Senior Cup in his first season back at the helm. In 2017, the Hatters missed the Play-Offs by a single goal.

This season he has taken County into the Play-Off places with just a handful of games remaining until the end of the campaign.

During his time as a player at the club, Jim hit 64 goals in 505 appearances, achieving two promotions and reaching a League Cup semi-final. Only John Rutter and Andy Thorpe have played more games for County, and the 49-year-old is a proud member of County’s Hall of Fame.