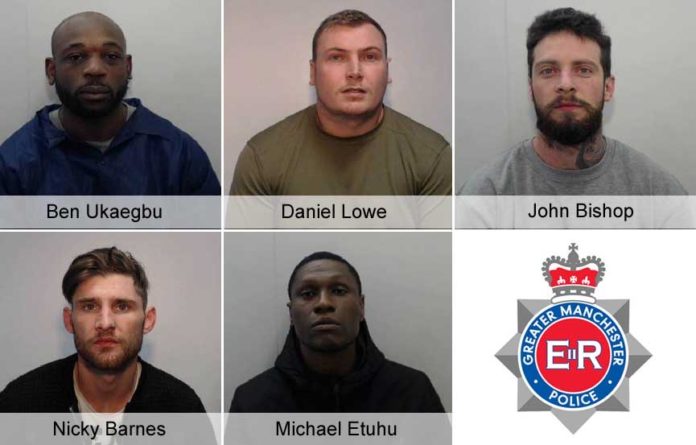 Five people who kidnapped, tortured and blackmailed a man have been jailed for a total of 50 years 11 months.

In March last year the five placed a tracking device on the victim’s car allowing them to track his location remotely in preparation for the kidnap.

A month later, the victim,a man in his 30s,was approached by Daniel Lowe, John Bishop and Ben Ukaegbu who were misleadingly dressed as police officers and falsely arrested him, placing him into the back of a car which had false number plates.

The kidnappers drove the victim to a back street in Gorton where they dragged him out from the car, put a hood over his head and put him in a van which drove to a building in the area.

Bishop, Ukaegbu, Barnes, Lowe and Etuhu forcibly held the victim at the building for around 13 hours. The group threatened the victim using an imitation firearm as well as brutally torturing him, using weapons such as a blowtorch and taser, in order to scare him into co-operating with their demands.

Using a bandit phone, the group contacted various members of the victim’s family and demanded a ransom which they asked to be delivered to an address in Birmingham.

The family informed police who were able to track down the location and sent in an armed police team to break into the building. Officers were able to arrest Bishop and Ukaegbu who were acting as guards for the victim – who had been handcuffed to a chair.

Etuhu, Barnes and Lowe were not present at the time, but were pursued by GMP officers and arrested in May 2019.

Today  all five men were sentenced at Manchester Crown Court.

Nicky Barnes ,27,of Greenwood Road, Northampton was jailed for 12 years after pleading guilty to conspiracy to kidnap and conspiracy to blackmail.

Daniel Lowe also 27 of Byfield Road, Northampton was jailed for 10 years 6 months after pleading guilty to conspiracy to kidnap and conspiracy to blackmail.

Michael Etuhu,36,of Leftbank, Manchester was jailed for 10 years 2 months after pleading guilty to conspiracy to kidnap and conspiracy to blackmail.

Ben Ukaegbu,38,of Windy Ridge, Northampton was jailed for 11 years 3 months years after pleading guilty to conspiracy to kidnap and conspiracy to blackmail.

John Bishop,31,of Stanley Road, Northampton was jailed for 7 years after pleading guilty to conspiracy to kidnap and conspiracy to blackmail.

Detective Inspector Gareth Davies, of GMP’s Major Incident Team, said: “This was a terrifying attack on a man who was held against his will and senselessly tortured. This crime was carefully thought out and planned by this despicable group of offenders and their behaviour was ruthless and inhumane.

“The severity of these offences should not be underestimated and I would like to thank our GMP officers who have been working tirelessly as part of Operation Cervine to put these offenders behind bars where they can take the time they need to reflect on their actions.