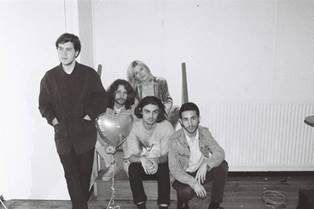 Straight out of Stockport, Kyle Ross (Vocals/Guitar), Daisy Valentine (Keys/Vocals), Mitch Bancroft (Drums) and Raffaele Pani (Guitar) and Lewis Jobson (Bass) are a tightly knit bunch, some of the them met at Stockport School and others in the local pub.

Kicking off with lead single ‘Want Love’, all four tracks on the EP are produced and mixed by Blossoms. Fuzzy Sun’s psych-pop rock sound comprises of a wide variety of influences including Chic, Tame Impala, Fleetwood Mac and Dr Dre. Dirty disco flared bass lines and seductive harmonies are prominent in all 4 tracks.

The five piece are gearing up for a busy year including going on tour with Blossoms in May alongside festival appearances such as Festival No.6, Liverpool Sound City and Kendall Calling. The band sold out the first two shows of their recent four date residency at Manchester’s venue Jimmy’s. The final two sold out shows there are Sat 24th March and Fri 5th April.