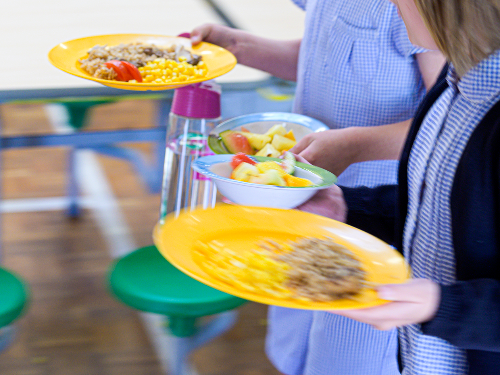 Two leading economists at the Institute for Social and Economic Research at the University of Essexhave tracked the impact of the Government’s Universal Infant Free School Meal policy which since 2014 provides free lunches to all four to seven year olds in English primary schools.They found this intervention is making a difference to reducing Britain’s childhood obesity crisis.

A quarter of all UK children are overweight or obese when they start school aged 4 or 5, rising to one third of all children by the time they leave primary school aged 11.

The researchers followed the BMI data collected by the National Child Measurement Programme from children in 16,000 primary schools, to examine the impact of the nutritionally-balanced, maximum 530 calories, universally free school dinner, introduced by the Coalition government in 2014.

The new healthy school meal, prompted by campaigns from Jamie Oliver, costs £437 per child per year and the universal policy has hugely reduced the use of home-packed lunches for Britain’s youngest school children. Previous research in 2010 found that the average children’s lunchboxes weighed in at 624 calories, and two thirds of lunchboxes contained at least two items of high calorie nutritionally-empty foods like sweetened drinks, crisps and chocolate bars.

Dr Birgitta Rabe and Dr Angus Holford looked at how children’s weight changed across the school year for Reception children following the introduction of the £600 million-a-year policy.

Dr Rabe said: “This intervention has a significant impact by reducing Reception children’s obesity rates by 7%. It’s a small impact but it’s fast and it’s more effective than other school based initiatives on children of this age, like running the Daily Mile or healthy eating messaging.

Dr Holford added: “We found a beneficial effect of school meals nationally, but it is also apparent when we look only at school children in more affluent areas. This suggests that even for children of middle class parents, the school meals were more nutritionally balanced than what they were bringing in their lunch boxes.”

The study is part of a larger Nuffield Foundation project tracing the impact of the policy of providing balanced school meals to all young children, on bodyweight outcomes, rates of absence due to ill health and attainment in school tests, with full results due to be published early this summer.

UK failed to react to the coronavirus threat fast enough & is now heading...