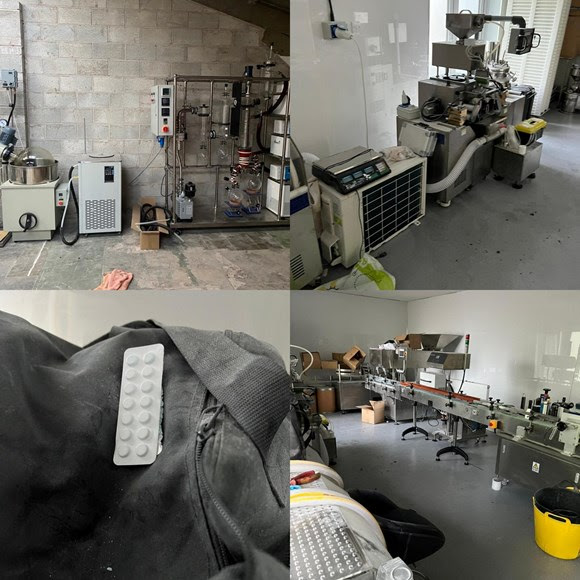 A total of nine addresses were raided by officers in Salford and Wigan as part of a crackdown on the illegal supply and manufacturing of counterfeit prescription drugs where two sophisticated labs, believed to be where Diazepam pills are being made, were discovered. It’s estimated that both labs, on Albion Street in Salford and Lower Green Lane in Wigan, may have been making thousands of tablets an hour.

The operation, led by GMP’s Serious and Organised Crime Group (SOCG), was part of Greater Manchester Police’s commitment to taking drugs off the streets under Operation Cranium, a multi-agency response to prescription drugs and the sale of counterfeit medication mainly being sold around the Cheetham Hill area.

Around £20,000 in cash and assets including Rolex and Omega watches worth approximately £30,000 were seized, along with three firearms and ammunition taken from an address on Lower Green Lane in Astley, are awaiting further testing to see if they are viable.

Today’s action follows a seizure of over 2.6 million Benzodiazepine tablets on 1 April on the M61 motorway near Rivington Services where a man was arrested and charged with possession with intent to supply a controlled drug of Class C. Ehsan Ahamath, 12/04/1990, of Langley Road, Kings Lynn, Norfolk, is due to appear at Bolton Crown Court on 19 September 22.

Detective Chief Inspector Jim Faulkner, from GMP’s SOCG, said: “Misuse of prescription drugs can lead to fatal consequences and there have already been several cases where people have become seriously ill or died as a result of acquiring them illegally.

“Illegal drugs and their distribution can not only blight communities, but can also pose a real harm and risk to both those in the community and those using and taking them. We regularly work with partners including Public Health England and the Greater Manchester Drugs Early Warning System which monitors new and emerging drugs that pose a real threat.

“We will not hesitate in taking action on those involved and today is a strong example of this whereby we’ve wiped out a clearly sophisticated set up and hopefully saved lives as a result. Today’s warrants are another huge step in our crackdown and it doesn’t stop here.”

Parts and mechanical items from inside the suspected labs are currently in the process of being dismantled and investigated.

DCI Faulkner added: “I can’t emphasise enough the dangers of taking these drugs without a relevant prescription and dosage guidance from a healthcare professional. Illicit supplies of prescription drugs may be counterfeit or adulterated and anyone purchasing such drugs cannot be sure of their origin or what they may have been mixed with. Packages may also contain incorrect dosage information.