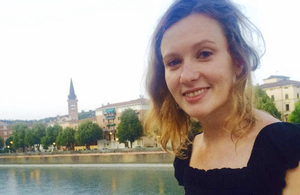 A former University of Manchester student has been found dead in Beirut.

The body of thirty year old Rebecca Dykes, who worked on a military aid programme, was found next to a road in the Lebanese capital yesterday.

According to local media reports, choke marks were found on her neck and she had been raped.

It is believed that she was killed after meeting friends and colleagues at bar on Friday night.

Police have launched a murder investigation.

34 year woman in hospital with life threatening injuries after being hit by drug...