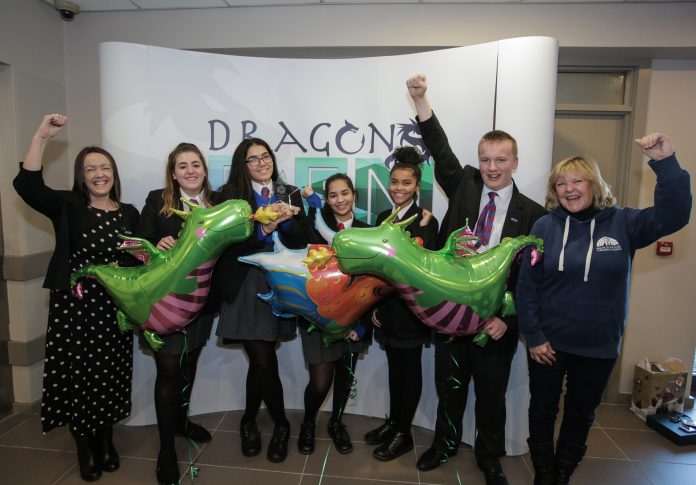 Students from St Antony’s Catholic College in Urmston beat 19 other schools from across Greater Manchester to be recognised by business leaders for their ingenuity in Manchester Airport’s Dragons’ Den competition.

Competing schools from across the region gathered for a ‘Grand Final’ at the Holiday Inn Express, Manchester Airport and pitched their products to the Dragons, presenting a summary of productivity, finance and lessons learnt as a result of the experience. The Dragons were made up of representatives from locally based businesses including Cathay Pacific, Marriott Hotels and John Lewis.

The students from St Antony’s Catholic College raised an incredible £6181.28 through the sale of their imaginative and poignant Manchester bee tree decoration. They created the wooden Manchester bee decoration after being challenged to create a Christmas present that could be sold for £5 or less.

The winning team enjoyed a VIP trip to see Elf the Musical, where they were picked up from school by limousine before going for dinner and being taken to see the hit festive musical.

Fiona Wright, Head Teacher of winning school St Anthony’s Catholic College said: “The students have worked so hard, devoting many hours to the project both inside and outside of school. The staggering amount they’ve raised is testament to this and all of us at the school are immensely proud.

“The whole experience has been fantastic for them, and I’m sure they’ve come away with some invaluable skills for the future”.

In second place was Priestnall High School who raised a whopping £4345.22. Third place went to Wilmslow High who raised £2097.30.

Wendy Sinfield, Community Relations Manager at Manchester Airport, said: “There were some fantastic ideas this year, with real originality from the teams and I’m overjoyed by the incredible amount they’ve managed to raise for charity.

“The Dragons’ Den competition is not only fun for the students, but gives them skills and knowledge that will help with their future careers.”