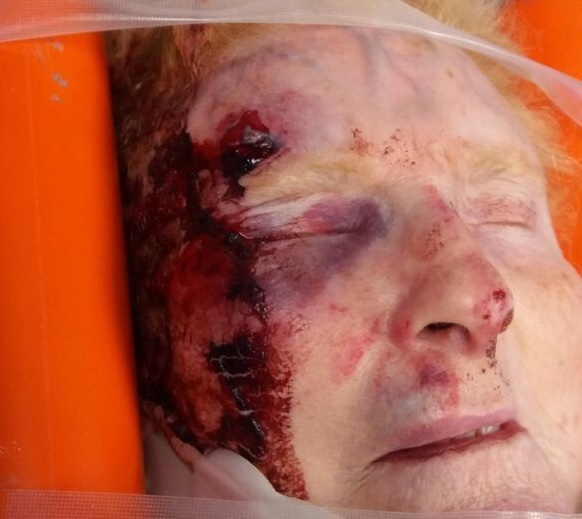 Greater Manchester Police have released photos of an elderly woman’s injuries following an incident in Chadderton on Tuesday night.

79-year-old Beryl Allsop had been out shopping and was returning to her car which was parked in the car park of Morrisons on Hollinwood Avenue.

She was approached by a man who grabbed her car keys before stealing her blue Vauxhall Astra. As the offender drove away, Beryl was dragged along with the car causing serious injuries to her face and head.

Emergency services attended and Beryl was taken to hospital for treatment where she remains in a stable condition.

Enquiries are ongoing, and police are appealing for witnesses to come forward.

Detective Sergeant Alex Wilkinson, of GMP’s Oldham borough, said: “Beryl received particularly nasty injuries in this incident, and she has been left terrified by what has happened to her.

“The man responsible for preying on an elderly woman is an absolute coward and we are doing everything we can to find him, but we need the public’s help.

“We are keen to hear from anyone who was in the area of Morrisons car park around 9pm on Tuesday evening who saw anyone acting suspiciously.”