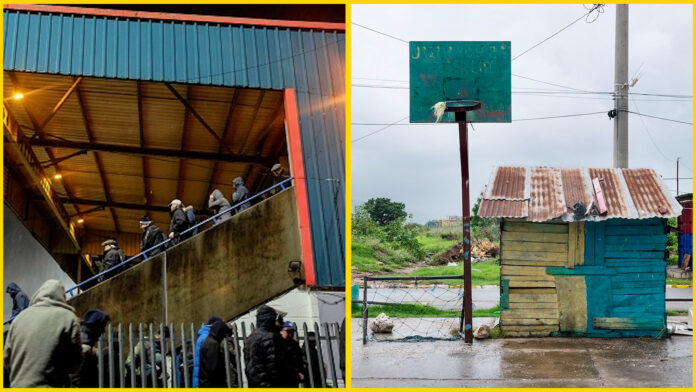 The Football Art Prize exhibit, which has been developed to celebrate art and football, is now open to the public at Touchstones Rochdale until 26th June.

UK and international artists were invited to submit their entries and have them reviewed by a prestigious selection panel of prominent faces from the world of both art and football.

Filled with a variety of different pieces including photography, painting, animation, textile and video the exhibition highlights many different perspectives on the beautiful game. From fans, players, managers and even grassroots football everything within the sport and its impact on culture is celebrated.

Painting ‘Match of the Day’ pictures artists Morag Casiter’s fiancé streaming a football game on his laptop while in bed highlighting the ways in which modern technology has given more fans access to the sport.

Other perspective of fans are highlighted in photography pieces ‘Rainy Night in Rochdale’ and ‘Long Walk Home’ by Derek Taylor. The first photograph home fans at the Crown Oil Arena leaving the stadium after their 2-0 triumph over local rivals Bolton.

The second pictures Oldham Athletic fans leaving the Peninsula Stadium of Salford in 2020. Both are part of a photography project called ‘Football is Life’ which focuses on local derby games in the north of England.

Charlotte C Mortensson focuses on a communal sports ground in Jamaica in ‘Rema Sports Ground in the rain (series: football in trench town)’. Usually a venue for youngsters to be playing football the weather meant that area was vacant at the time the piece was created. Emphasising the popularity of the game across the globe the popularity of the sport in Trench town is huge.

The panel gave Mortensson third place for her other entry ‘Shabba 1980-2018’ and an animated video game like entry featuring Brazilian sticker Adriano came in second place.

‘Roy Keane’ by Toby Michael claimed top spot. The painting shows the ex Manchester United captain painting a self portrait of himself – a Red Devil.

There are numerous breathtaking pieces in the collection and wether a football fan, a person with a keen interest in art or neither there is enjoyable moments to be had browsing the exhibition.

It is free to view at Touchstones Rochdale until 26th June and then the show will then tour the Millennium Gallery, Sheffield, from July 2022, and to Sunderland Museum & Winter Gardens from November 2022.

The Jungle Book swings back to Oldham Coliseum

Festival of Research at Salford University