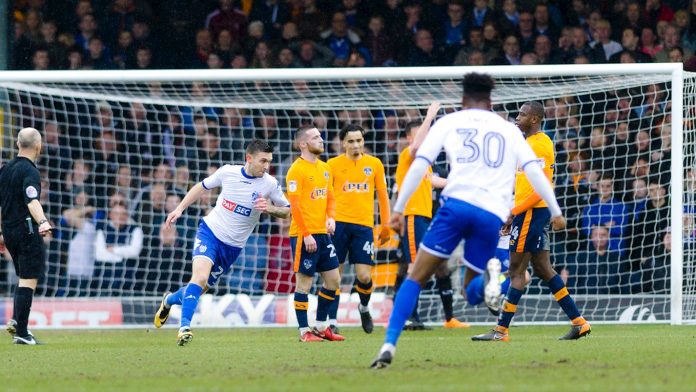 The hosts had taken the lead in fortuitous circumstances late in the clash, with George Boyd’s effort standing despite the assistant referee seemingly raising his flag.

But substitute Wilbraham remained cool, calm and collected to nod home a leveller deep into stoppage time to the delight of the traveling Bolton faithful.

Chey Dunkley, Will Grigg and Gary Roberts were all on target for the Latics.

Manager Keith Hill has hailed Rochdale’s performance against promotion chasing Rotherham United as “probably the best of the season”, after his side claimed all three points with a 1-0 win at the New York Stadium.

The victory ended the Millers’ 14 game unbeaten run and saw Dale record back-to-back wins in the league for the first time this season with Stephen Humphrys’ second half goal sealing a deserved three points .

Finally an n exciting derby saw Oldham come from two goals behind to snatch a point at at Gigg Lane against Bury.

Bury got themselves into a two-goal lead inside the opening 34 minutes of the games as Jay O’Shea and Neil Danns put the Shakers ahead.

However before the end of the first half, Athletic did pull a goal back as Craig Davies notched into an empty goal to give Latics hope for the second half.

Wellens’ men pushed for an equaliser and got it on 77 minutes through a fierce strike from Ben Pringle. He fired into the far corner to ensure the points were shared at Gigg Lane.