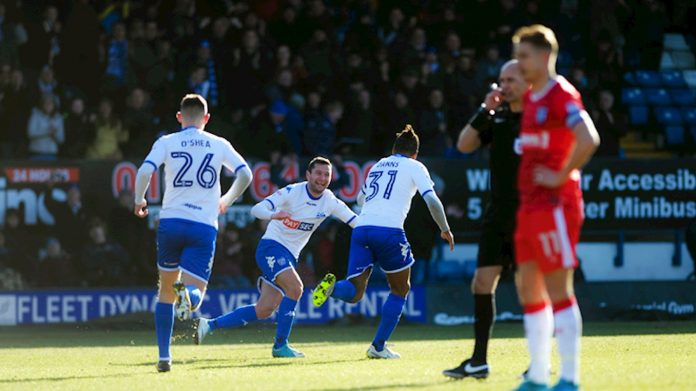 Wigan Athletic returned to winning ways at the weekend as they beat Rochdale at the DW Stadium.

Captain Michael Jacobs put Latics in front early on when he latched on to Jamie Walker’s neat flick down the left to fire low past Josh Lillis in the Dale goal.

“It was novice defending at best, so I’m disappointed but it’s difficult at the minute, and the players are going through the same rollercoaster that I am. They know they’re better than the position and the results that we’re in.”

Rochdale are bottom after Bury managed to see out a 2-1 win against Gillingham at Gigg Lane.

Neil Danns and Harry Bunn’s first-half goals sent the hosts into a 2-0 lead at the break, much to the delight of the home supporters.

Gillingham managed to pull one goal back on the 69th minute through Connor Ogilvie, but it was not enough to level the scores.

Meanwhile Oldham’s game against Southend fell victim to the weather.In a statement following the postponement the club said

“After the covers were placed on the pitch on Thursday afternoon, temperatures continued to drop and when the covers were removed this morning, an area underneath the main stand was frozen.Whilst the rest of the pitch was playable, the area underneath the stand remained without sunlight. Ground staff, office staff and Oldham Event Centre staff worked tirelessly to try to get the game on but the referee made the decision to call the game off.”

In the Championship, Bolton picked up a hard-earned point away at Norwich City, a result that leaves the club four points clear of the relegation zone.

The hosts enjoyed the majority of possession in the clash, but couldn’t find a breakthrough as the Whites stood firm and put in a resolute performance to ensure that they took a share of the spoils back up north with them.