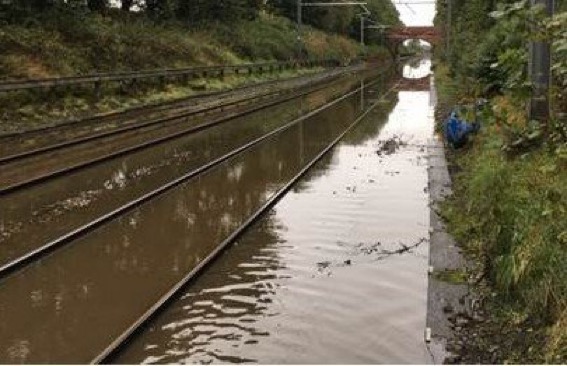 “River levels are rising at the Manchester Racecourse river gauge as a result of heavy rainfall on 29/09/19. We believe there is a possibility of flooding for low lying land and roads around the Rivers Irk and Medlock, Wince and Worsley Brooks and their tributaries. Further heavy rainfall is forecast over the coming days. Our incident response staff are closely monitoring weather forecasts and river levels and will issue further flood alerts if necessary.”

There are also problems on the railways

Trains between Blackpool North and Preston are suspended following reports of floodwater on the line in the Poulton le Fylde area.

Flooding at Culcheth Farm (pictured above), between Newton le Willows and Manchester, means trains are running at reduced speeds in the area

There are lineside equipment issues between Summit and Dean Royd tunnels – towards Manchester Victoria which may cause delays.

‘None for the Road’: Christmas campaign highlights potentially fatal consequences of driving after drinking...