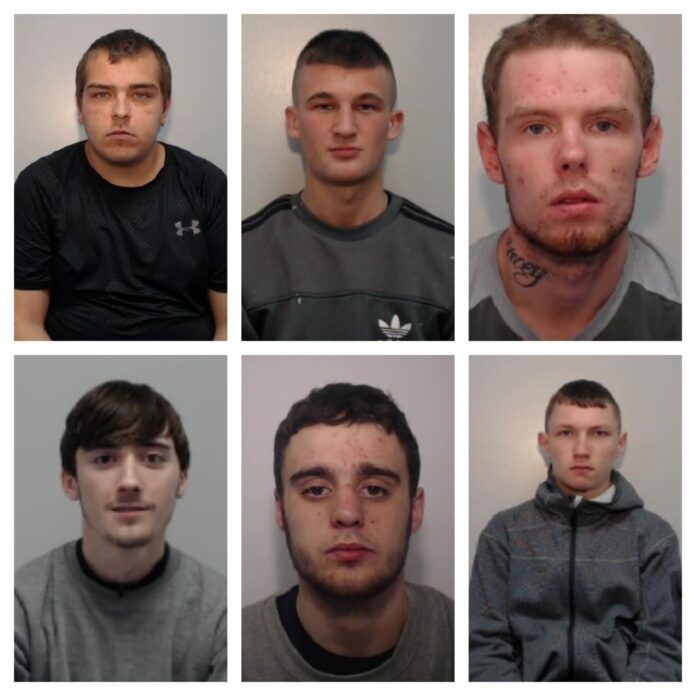 Five men and a woman involved in a class A drugs conspiracy between Wigan and Merseyside, that made estimated sales exceeding £800k, have been sentenced to a total of imprisonment of 36 years and nine months after being rumbled by our detectives tackling organised crime in the town.

The men – aged between 21 and 24 – were jailed earlier this week after a two-day hearing held at Bolton Crown Court after all previously pleading guilty – with a sixth man to be sentenced in February 2022.

Jarir was found to be frequently travelling to Atherton and – along with the rest of the gang – was using houses in the area for the storage, preparation, and distribution of large quantities of class A drugs – a method synonymous with County Lines gangs, known as ‘Cuckooing’.

Intelligence gathered by detectives saw an investigation launched and a warrant executed on Bridges Street on Thursday 1 November 2018, which saw Jarir and Rhys Jones, 22, arrested and heroin, drugs production equipment, shotgun ammunition and £4k cash recovered, amongst other significant items.

Phones recovered from that initial raid enabled officers to link Jamie Ashcroft, 21, Declan Prescott, 24, and Nathan Rutter, 21, to the conspiracy – and enquiries established that they were being orchestrated by Jones – under the direction of Jarir and Muldoon.

The trio also were understood to be stealing vehicles for the purpose of the organised crime group’s illicit activities.

Ashcroft, Prescott, and Rutter were all arrested and found to be in possession of class A drugs, which caused fractions within the gang as drug debts were beginning to mount.

This was particularly the case for Prescott who had twice been stopped by police in a stolen vehicle; on the first occasion he made off, reaching speeds of 80mph in a 30 zone and rammed a police car.

After his arrest on another occasion, he made threats to ‘chop up’ the two officers arresting him with two large machetes that were in the vehicle at the time of his arrest.

Prescott was later stabbed repeatedly in the head by Muldoon for not being able to pay back the full amount he owed.

Rutter was also arrested following a police pursuit and was found to have a machete, a Taser, a knife, and CS spray, while Ashcroft’s arrest during a warrant in January 2020 uncovered information that he was paying his mother – Marie Ledwith, 39 – £50 a day to store drugs at her address on behalf of Muldoon.

Despite being remanded in custody, Muldoon continued to run the business from a mobile phone he had within his cell in prison, directing Ashcroft in the supply and distribution of drugs.

The group were ultimately dismantled during the course of the Challenger investigation, and all seven of the group were charged with various drugs, driving and violent offences.

Jarir ,29, of Kingsland Crescent, Liverpool, is due to be sentenced on Wednesday 9 February 2022 after admitting offences of conspiracy to supply class A controlled drugs.

Muldoon,23, of Lowerson Crescent, Norris Green, Liverpool, has been sentenced to six-and-a-half years after admitting offences of conspiracy to supply class A drugs; he will serve this sentence in addition to the nine years for which he is currently serving for the stabbing of Declan Prescott – taking his sentence to 15-and-a-half years in total.

Ashcroft,21, of Keble Grove, Leigh, has been sentenced to six years after being found guilty of offences of conspiracy to supply class A controlled drugs.

Rutter 21, of Wigan Road, Leigh, has been sentenced to five years after admitting offences of conspiracy to supply class A controlled drugs, possession of a prohibited weapon and dangerous driving.

Jones 22, of Railway Road, Leigh, has been sentenced to three-and-a-half years after admitting the offences of conspiracy to supply class A drugs.

Ledwith 39, of Hilda Street, Leigh, has been sentenced to a community order after admitting the offence of allowing her premises to be used for the supply of class A controlled drugs.

Detective Sergeant Simon Monks, of GMP Wigan’s Challenger Team, said: “I’m thrilled that this complex and lengthy investigation has concluded with five of these men being put behind bars – and a sixth to be sentenced at a later date.

“It sends a robust message that being engaged in this level of organised crime – and inflicting misery on our streets, as a result – is absolutely not going to be tolerated.

“Our investigation team in Leigh have put in hundreds of hours as part of this operation and this only highlights our unwavering commitment to act on intelligence by taking robust action to prosecute suspects and to safeguard any potential victims.

“The way that Jarir and Muldoon – in particular – tried to spearhead this illicit enterprise by storing and distributing large amounts of class A drugs, travelling from Merseyside to Wigan, demonstrates how the very nature of county lines gangs means they don’t respect borders and certainly don’t care for the people whose lives they destroy.

“What is clear, though, is that we will do all we can to work with our policing partners across the region and nationwide, to ensure that anyone we suspect of being involved in serious and organised criminality is dealt with; taken off the streets and put behind bars for a very long time”.

Man charged with manslaughter after pedestrian killed In Farnworth

Justice for James-Parents jailed over death of Wythenshawe toddler James