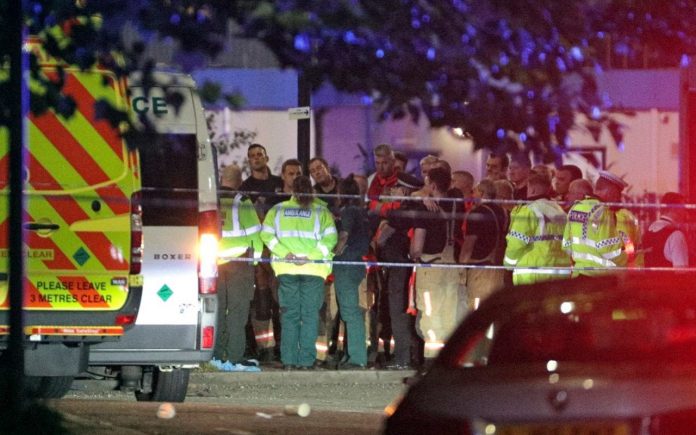 A 20 year old women has died in hospital this afternoon in hospital  after the incident last night when five other people, were injured by the hit-and-run driver at Trafford Park

The BMW which ploughed into the crowd was filmed performing laps of a roundabout moments before the crash which happened at Europa Way around 9.45.

A 21-year-old man has been arrested on suspicion of causing serious injury by dangerous driving and failing to stop after a collision. He remains in police custody

Yesterday fternoon, a 26-year-old man was arrested on suspicion of causing serious injury by dangerous driving.

There is no evidence to suggest that this is terrorism related at this stage.

GMP’s Chief Superintendent Wayne Miller, said: “Firstly, my thoughts are with the family of the woman who has tragically died this afternoon. All those who knew her will understandably be completely heartbroken and our specially trained officers are doing everything they can to support her family through this horrendous time.

“We currently have two men in custody who will continue to be questioned whilst our officers continue with their enquiries.

“At the time of the collision there was a car meet event in the area which approximately 60 cars attended. I believe there will be people with video or dash-cam footage of the incident or beforehand.

“Please, if you have anything which could help give these families the truth they deserve then please contact us.

“We will continue to patrol the area and work with Trafford Council to address any concerns.”

Man in his 30’s kidnapped in Fallowfield, beaten up and dumped in vicious murder...