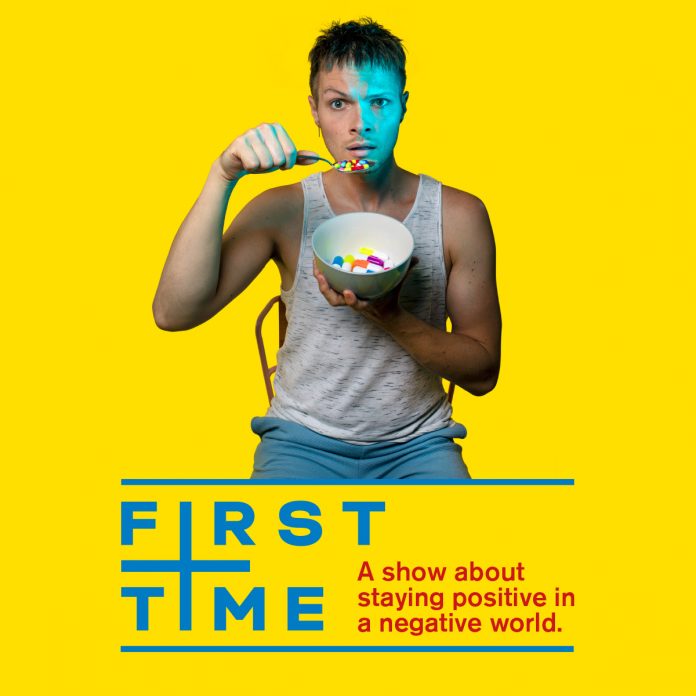 First Time, a show that explores one young man’s experiences of contracting HIV after the first time he had sex aged 16, premieres at Waterside, Trafford to mark the 30th anniversary of World AIDS Day. Told through a series of personal letters, poems, confessions and a drag alter-ego called Sue, First Time is a funny, frank and unapologetic one-man show about growing up queer and HIV+ in a straight, HIV- world.

Diagnosed two weeks after his 17th birthday, and just months after coming out as gay, Nathaniel kept his HIV status secret from friends and family for over 14 years. After coming out of the closet (again) in late 2017, he’s now advocating for better contemporary representations of HIV in popular culture, in his own words: ‘Tom Hanks in Philadelphia just doesn’t cut the mustard anymore…’.

‘I lived in secret, fear and self-loathing for 14 years. First Time marks a very public coming out as HIV+ through which I hope to inspire other people living with the virus to live more openly and break the cycle of stigma and shame.’

Working closely with the Greater Manchester PaSH Partnership (Passionate about Sexual Health), First Time will spearhead a whole weekend of events at Waterside to mark 30 years since the first World AIDS Day with creative workshops, a gallery exhibition, free rapid HIV testing and a ‘coming out’ party raising funds for local HIV charities.

The Waterside and Creative Industries Trafford (CIT) Theatre Commission opportunity supports ambitious theatre-makers based in the North to develop a new, innovative performance to premiere at Waterside with First Time beating off the competition from over 70 applicants, eight of whom presented their ideas to a judging panel at Waterside.

‘I was struck by the urgency and ambition of First Time. In his presentation, Nathaniel identified how his work differed from existing narratives around HIV and it was something which really excited the panel. Nathaniel’s project is unique, bold, brave, and is one which has the potential to make waves on a regional and national level. I’m particularly excited to support the development of this project and Nathaniel as creative as he takes on his first solo project.’

Nathaniel will receive £2,000 towards producing the show, a three night run, mentoring from Waterside and CIT staff and a tailored support package. The project is also supported with a Superbia ‘Grant for the Arts’ from charity Manchester Pride.

The project received initial support and development from Contact, Manchester and Lawrence Batley Theatre, Huddersfield and will be produced in association with popular, emerging theatre company Dibby Theatre .

£15 / £13  (Ticket includes play and party. A contribution from this event will be donated to local HIV charities)

That sinking feeling-Inspired by Oumuamua, the first alien rock to travel here from another...

Victoria Baths will be holding a summer fundraising concert