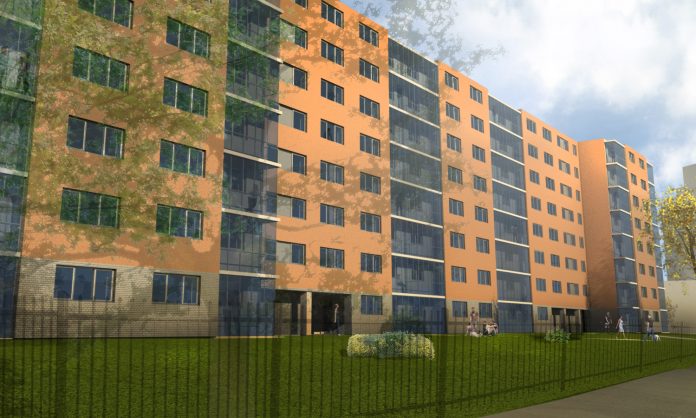 The first images of a major redevelopment project at an iconic Salford apartment block have been unveiled.

New artist’s impressions show how Canon Green Court in Trinity could look, along with a brand new 11-storey residential building.

Housing association Salix Homes has been working alongside residents and its design team – Willmott Dixon, civil engineers Elluc, and architects Corstorphine and Wright – to develop proposals to renovate the building and create much-needed new homes in the area.

The proposals were submitted to Salford Council this month (March) and include plans to fully refurbish the ageing block, with new kitchens, bathrooms, heating systems, exterior re-facing and insulation.

As part of the proposals, the new apartment block will be built within the expansive grounds of the site on Canon Green Drive and includes 108 one and two-bedroom apartments.

Westminster House, a three-storey apartment block on the same site, will also get an external facelift.

Lee Sugden, chief executive at Salix Homes, said: “We’ve ensured that our residents have been involved with our development proposals every step of the way, and we are delighted to finally be in a position to formally submit our plans to Salford Council and unveil our bold vision for a new-look Canon Green Court campus.

“We are confident that our ambitious proposals will transform the appearance and living facilities at Canon Green Court, and deliver the essential improvement work that residents have been calling for, as well as help deliver our ambitions to provide more desperately needed homes for local people.

“Canon Green Court has dominated the Salford skyline for more than half a century and our significant investment will ensure it stands proud for many years to come.”

The 1960s apartment block has provided the backdrop for several television dramas including ITV’s Prey and Channel 4’s No Offence.

Kim Ebling, director at Corstorphine and Wright architects, said: “The redevelopment of Canon Green Court is a fantastic project for Corstorphine and Wright to be involved with and we are confident that the proposals will complement the wider regeneration in the area and create much-needed new homes that are fit for the future.”

If the proposals are given the green light by council planners, it’s hoped that work will start on site later this year.

Salix Homes, which owns more than 8,300 properties in Salford, is investing £75million by 2020 into improving homes and communities across the city.