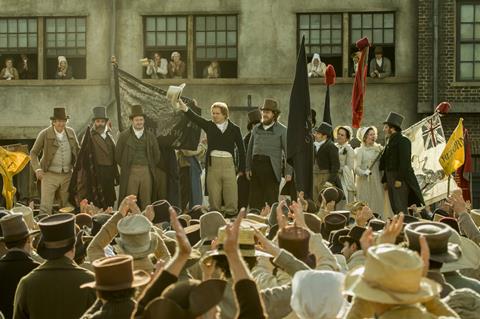 The first image from Mike Leigh’s historical drama Peterloo have been released.

Three years in the making and starring Maxine Peake, Pearce Quigley, Philip Jackson, Karl Johnson, Tim McInnerny and David Moorst, the film tells the story of a band of protestors who stood up for parliamentary reform, calling for a greater range of voting rights in the wake of economic strife and famine at the end of the Napoleonic Wars.

Eighteen people were killed and over six hundred were injured at Peter’s Fields during a peaceful demonstration for electoral reform.

Local magistrates, watching from a window near the field, panicked at the sight of the large crowd assembled and read the riot act, effectively ordering what little of the crowd could hear them to disperse.

The Yeoman’s guard, allegedly fuelled by drink charged with bayonets fixed into the crowd who had gathered that Monday morning to hear speakers call for parliamentary reform.