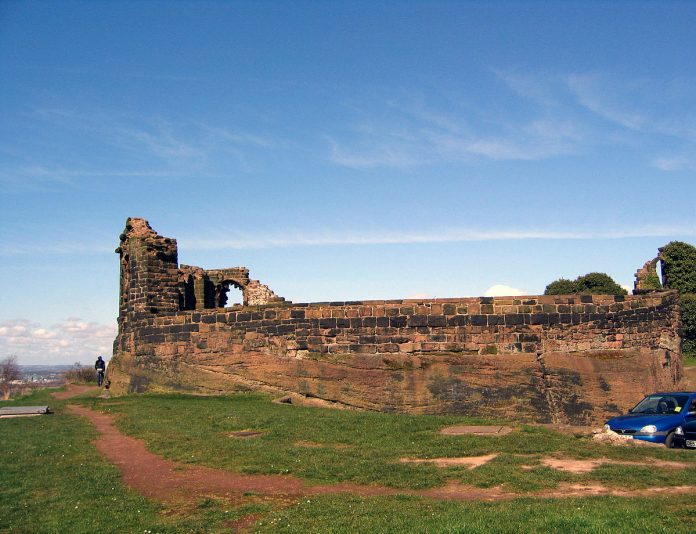 The second season of excavations at Halton Castle has raised more questions that it has answered. Archaeologists from Norton Priory and the University of Salford Centre for Applied Archaeology had hoped to discover why two people were buried in such an extraordinary location.

However, as BBC North West’s Inside Out team discovered, the community dig only uncovered further mysteries.

Skeletons within castles are highly unusual and archaeologists had speculated that there may have been a graveyard for a chapel. However, no more burials were found making this hypothesis unlikely. The pathologies of the skeletons suggest that they were more likely to have been ordinary people than aristocrats so why were they buried in such an unusual location where space was at a premium?

Funded by the Heritage Lottery Fund, the University of Salford’s Centre for Applied Archaeology were commissioned by Norton Priory to lead on a community excavation. 98 volunteers took part, excavating the base of a tower, the area around the two skeletons and exploring a section of huge post holes. A silver coin of Henry III hinted at an earlier phase of the castle but more mysteries were unearthed in the form of three large square pits cut directly into the bedrock.

It is believed that they are remnants from medieval industrial processes – perhaps tanning or pottery making. If so, they are yet another highly unusual feature within a castle. Nearby, the postholes are likely to represent the foundations of a large timber framed hall. It adds to the picture of a crowded and busy bailey and one of potentially significant industry.

Sarah Cattell, Project Officer at the Centre for Applied Archaeology said, ‘The dig has been a great success and has given us more fascinating evidence of what was going on in the castle throughout its history. Despite a second season of excavation we still have more questions than answers so it’s going to be really interesting work to try to unravel the mysteries of the castle!’

The dig uncovered features from all of the different periods of the castle, from the medieval tower and evidence of industry to the edge from the 19th century bowling green and platforms from the Second World War nissen huts.

Lynn Smith, Senior Keeper at Norton Priory Museum & Gardens said, ‘This was yet another amazing community dig. The enthusiastic support from volunteers and funding from the Heritage Lottery Fund meant that many important discoveries have been made. These will be thoroughly investigated in the post-excavation phase.’

The role of the best man: what you need to know