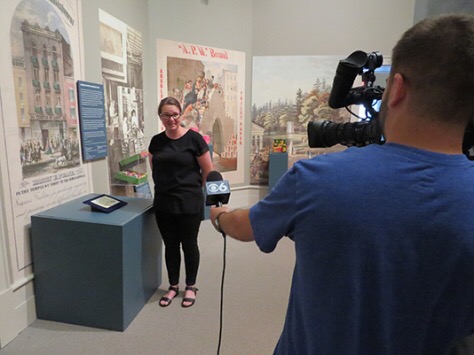 CHRISTMAS MAY be more than six weeks away, but Manchester Metropolitan University’s Special Collections has already sent an extraordinary card to the Albany Institute of History & Art, in New York.
Curator Stephanie Boydell travelled more than 3,000 miles to personally hand deliver a copy of the first commercially produced American Christmas card, which will be part of an exhibition telling the story of New York State in 50 objects.

The card was designed by Edwin Forbes for the department store of RH Pease in Albany, and printed around 1850. This copy is believed to be the only copy of the card in existence, and this is the first time the card has been exhibited in the United States.

Stephanie said: “It’s amazing to think that the only known copy of the very first American Christmas Card is held at our Special Collections. It’s a wonderful illustration of the strange lives that objects lead after they are made. It was a pleasure to take it ‘home’ to Albany and to place such an innocuous little card amongst the other ‘firsts’ that the city claims.”

Tom Nelson, Exhibitions Designer at Albany Institute of History & Art, said: “We were waiting for an opportunity to bring the card here, when our new exhibition, The Capital Region in Fifty Objects, seemed appropriate, so we asked Manchester Met and they agreed.

“The card illustrates and segues into the story of how this region played a formative role in the creation of our modern Santa Claus and the rise of the consumerist aspect of the holiday, as it so happens Richard Pease was also the very first to use an image of Santa Claus in a commercial advertisement.

“We are excited to finally have the card here at this museum–just a few blocks from where it was printed at 516-18 Broadway.”

Richard Pease and his two sons had a lasting impact on trade in Albany at a time in its history when the city was expanding rapidly. The Albany Institute of History & Art owns many prints, games, and instructional children’s books published by Pease, which were often delineated by Elisha Forbes (active in Albany from 1842-1852), the man who designed the first American Christmas card.