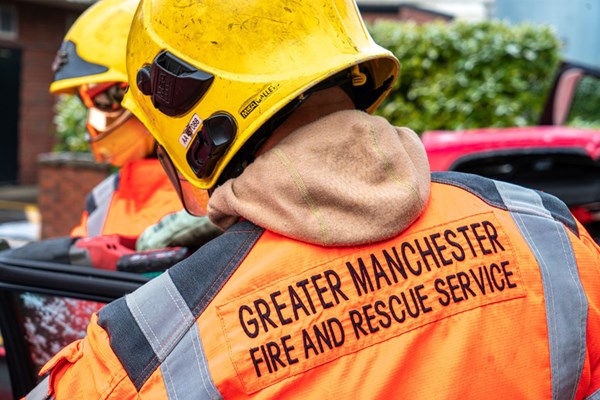 A working smoke alarm has saved the lives of three people after it alerted them to a fire in their home.

Greater Manchester Fire and Rescue Service (GMFRS) crews from Hindley, Leigh and Atherton were called to a semi-detached house on Ashley Drive in Leigh just before 11pm on Sunday .

Firefighters attended the scene quickly and were faced with a well-developed fire in the upstairs front bedroom, with a large amount of smoke and flames. Firefighters went into the house and rescued all three people, whilst other crew members tackled the fire in the bedroom.

Firefighters successfully put the fire out and stopped it spreading to other rooms and the neighbouring house.

It is suspected that the fire was caused by smoking materials being discarded on a bed.

Occupants in the house next door were also evacuated by crews due to the smoke in their property.

GMFRS Station Manager for Wigan, Chris Evans, said: “If it wasn’t for the smoke alarm alerting the residents to this serious fire, the outcome could have been far worse. This incident is a reminder to make sure there are working smoke alarms on each floor of your property.

“The swift action of our firefighters was lifesaving as all three residents were able to escape the property, and I want to thank the crews for their hard work.”

After the rescue, crews provided first aid and oxygen therapy to the occupants, before North West Ambulance Service (NWAS) crews took over and transferred them to hospital.