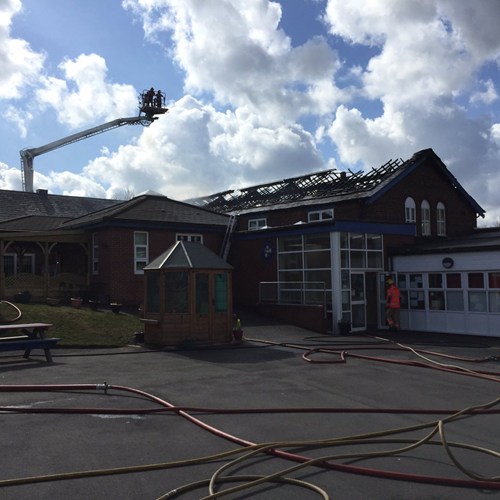 AN investigation by Greater Manchester Fire and Rescue Service (GMFRS) has found that the fire at Westleigh Methodist Primary School in Leigh yesterday was most likely caused by electric solar panels on the roof of the main hall of the school.

The bank of solar panels which are embedded onto the roof on one of the buildings at the primary school is where the fire originated – and is thought to be due to an electrical fault with the panels. Due to fire damage to the panels and electricals, fire officers cannot determine exactly why the electrical fault occurred.

Station Manager Chris Roberts said: “A GMFRS Fire Investigation officer examined the fire burn patterns and determined that the source of the fire was at roof level. The fire started on the right hand side of the roof, where a number of solar panels were in place – causing the fire to spread resulting the whole roof being ablaze. The pattern of the fire burn would also conclude that the fire’s origin was in the vicinity of the solar panels.

“Examination on the inside of the main hall found charring on the top of the wooden beams which were situated under the roof of the building which would only occur if the fire was above the beam. Due to the intense heat of the fire, wiring from the panels were burnt away so we are unable to determine if or why an electrical fault occurred.

“An eyewitness account that was given to the emergency services when the fire first started stated that they saw approximately four  solar panels on the roof of the school on fire. These panels were located on the right hand side of the roof area. This account also supports the outcome of our investigation in determining the area of origin where the fire started and in identifying any materials that could possible cause a fire to start”