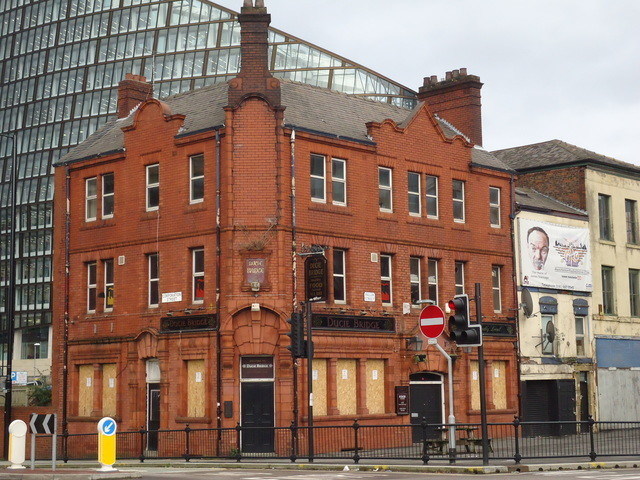 The fate of Manchester’s iconic Ducie Bridge pub remains in the balance despite the fact a petition to save the building which dates from 1892 having reached well over 3150 signatures in just 10 days.

Pressure Group Manchester Shield have made an application to Historic England for them to considering listing and will also be seeking to list other buildings in the city or as places of local interest if they are outside the remit.

“We would hope instead of a demolition ‘rush’ for a carpark, a cooling off period and further consultation will await.” says spokesman Adam Prince.

The pub closed its doors in August 2015 and stands on land which encompasses part of the £800m NOMA development project being delivered by a joint venture partnership between The Co-operative Group and Hermes Investment Management.

To say the Ducie Bridge is beyond saving has a stark comparison Upper Brook Street Welsh Baptist Chapel, which spent years on the At Risk register and now is completed in an accomplished redevelopment by Buttress.
Speaking to the young squatters who were violently thrown out of the Ducie Bridge in autumn 2016  they confirmed that the building is in good condition and one of the best they had been in as homeless activists seeking refuge in empty buildings. When the venue closed in August 2015, surely the premises if they were indeed, this unsound, would not have been licensed or safe to have been so?

We were particularly disturbed after speaking to NOMA and their public relations departments, who angrily called us for having reported on a précis of the conversation we had with them which offered no clarity on the structural damage, costs of damage, why the decision appears to be a done deal as to why the Ducie Bridge ‘needs’ to be demolished.

We were told to report the conversation a breach of an unspoken professional expectation that people do not report on conversations. We made it very clear unlike other people in the city we don’t do closed-door conversations, especially as campaigners for a building.

On the day of the protest, we cleared around the filthy streets around the venue which was full of trash in the carpark where another beautiful building UNICOL once stood until seven years ago.

We cleaned polystyrene takeaway boxes that had clearly been there for ages. NOMA, however, saw it fit to instead spend money sandblasting any of the chalk protests messages as soon as possible than face the critique and questions of their unnecessary ‘land grab’ for the latest land speculation, no doubt for landmassed investor sale property. Last week, it was with grave concern that we read about the Marble Arch filling that their business and structural integrity is under possible threat of the NOMA redevelopment and understand this pubs concerns and suspicions in regard to NOMA.

So why are these issues of demolition, blandification, and what people feel are exaggerations of buildings said to be in ‘beyond saveable conditions’ which bothers so many citizens in Manchester? Some of the concerns seem to be about the constant erosion of heritage assets, the character of the streets and the memories of places people have been. It is also symbolic of the exclusion of people from planning processes and the disingenuousness in the consultation process and Strategic Regeneration Frameworks that seek to profiteer the few, whilst excluding the many.

People are also concerned about the symbolic erosion of meaning of culture and venues. The huge stories, which NOMA also fails on, are those commitments to the community in what they say is ‘community focused’ development of ‘mutual respect’, seems instead to have been one of violence, selling to investors and missing any affordable targets for housing whatsoever.

This week has seen Mantra Warehouse closed and rumoured for demolition and the certain demolition of Sound Control and Linda’s Pantry.

People not only fear the homogenization of culture, the erosion of character but fear closed-door decisions which make these demolitions possible without dialogues on what heritage assets can be used. What next lays at risk are rumoured from being Cornerhouse, Little Ireland, Hotspurs and very likely other mills and pubs. Increasingly it seems fair to be concerned the political discourse becomes ever more estranged from citizens despite the ‘review of planning policy’ by MCC in October.

This petition shows an incredible impetus and the demand to do better in planning across the city, politically, in terms of consultation, approach, dialogue and seeking solutions for respected venues. Ducie Bridge could survive, simply if NOMA were not seeking land massing profiteering over a small Victorian Building, beloved by many.