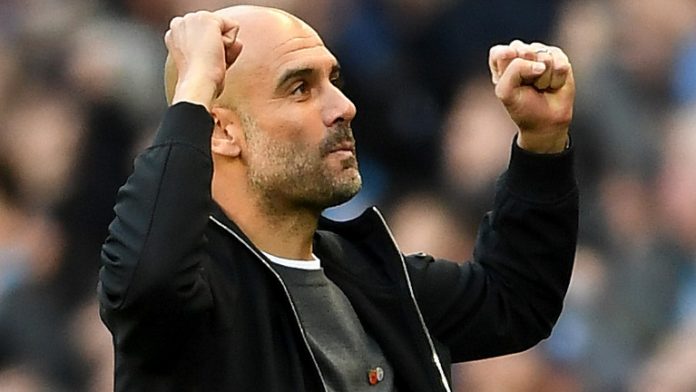 We can’t quite believe it’s that time of year already. It seems like only two minutes ago that we were dreaming of Football coming home, but the football league kicks off in less than 24 hours.

Next week the Premier League gets under way. This means you don’t have long left to select your Fantasy Football team.

To help you out, BetWay Insider has spoken to Fantasy Football legend Jay Egersdorff to discover his top tips. Jay is one of the most successful Fantasy Football managers to ever play the game and is the number one player in the FFScout Hall of Fame.

5.9m people took part in the Premier League Fantasy Football season last year. Jay has finished inside the top 0.25 per cent every year for 12 years of playing the game. This included finishing inside the top 105 in the world in two different FPL seasons.

If Fantasy Premier League betting existed, he would be the favourite every single year.

Jay gives us his top five tips for success, as well as a number of other top tips including this season’s players to watch, and the ones to avoid.

1. Use your eyes. Watch the games

With the emergence of statisticians and Artificial Intelligence bots attempting to pick Fantasy Football teams based on complex datasets and algorithms, Jay says:

“There are guys who don’t know tons about football but are really great at maths, and they will look at stats and analyse patterns.

That’s not what I’m about. For me, it’s about more than stats.

“If you’re watching Match of the Day, you might see that a misfiring striker isn’t necessarily missing chances.

“If they aren’t getting passed to, or if they’re getting in the right places and it’s just not happening, then you’d be inclined to stick with them.

“You can only get that insight from watching football. There’s no stat for that.”

2. Read up on the fixtures

Remember, you don’t have to stick with your team for the entire season. Jay stresses the importance of looking at the early fixtures:

“Remember, you aren’t picking a team for the whole season.

Think about the dynamic of the game, and you’re going to get better results.

“I always look at the first six weeks of fixtures, and I don’t just stick with the big clubs. You need to pick players based on who they are playing.

“You don’t need to recite every team’s fixtures, but knowing that one team has a good run coming up, or that another is playing two home games in a row, is good to have in the back of your mind so that you can take advantage of it.”

Just like real management, the most successful managers seem to be able to find value, whether it’s pulling an untested player from the youth team who turns out to be a mega-star, someone from the lower leagues who sets the top division on fire, or an out of favour player from another club who just needed some love and motivation. Jay tells us where he looks for value:

“I look for value everywhere. If you have £20m to spend, then Harry Kane is taking up £13m of that and you only have £7m left for a midfielder.

“Instead, if you went £10m and £10m you could get an awesome midfielder and still get a great striker.

“You have to ask yourself if Kane and someone from Watford is going to outscore a Man City midfielder and a Liverpool forward, for example.

“Spread your bets around by trying to look for more value.

You need 15 players that will play regularly. Your bench can be made up of fodder, but they do need to play.

“Players’ values go up and down. If you’ve got 15 players whose values are going up, that’s going to help you massively further down the line.

“If you’ve got three guys that are losing money, then that’s a major disadvantage.

4. Avoid points deductions at all costs

We’ve all been tempted to swap out that misfiring striker to the one who is in a rich vein of form, only for the goals to quickly dry up whilst your reject starts banging them in. Stick or twist, that is the questions. Jay tells us when it is, and when it is not worth taking a point deduction to get in a new player:

“It’s never really worth taking a four-point hit or more, unless you absolutely can’t avoid it. It’s like spinning a roulette wheel. It’s exciting because you might win a load of points.

“If you take a minus-four, though, and you’ve got a guy on the bench who scores two points, you’re actually on a minus-six.

“The guy in your team has to score six to make up for what you would’ve got if you had done nothing.

“Where it might work is if you’ve got a couple of injuries and only one transfer, and you bring in a player from a team with four really good fixtures coming up. Then it’s almost like a minus-one hit every week for four weeks. That’s a more long-term way of thinking and it cushions the blow.

“Doing that can pay off but doing it as a one-week spin goes from calculated risk to spinning the roulette wheel.”

5. Be consistent, but adaptable

How many of you have changed your entire team on week two? Jay tells us the importance of having a strategy, but also to be adaptable.

“If your style is to be risk-averse and you play half the season like that, don’t suddenly make a load of mad transfers to fix it.

“There are certain rules I use. If I’ve got a toss-up between two players for one starting space – it’s usually cheap defenders that you’ll be choosing between – I’ll always pick the one who’s at home. It’s about 33 per cent more likely that a team will win if they’re at home, so you should consistently play like that all season.

“Sometimes you’ll be down, and it’ll be disappointing, but over the course of the season the strategy will pay off.

“Things change, though. People can get carried away with planning, but your plans can be ripped up very quickly. The best players can plan, but they also change their strategy on the fly. The ones who are adaptable do the best.” 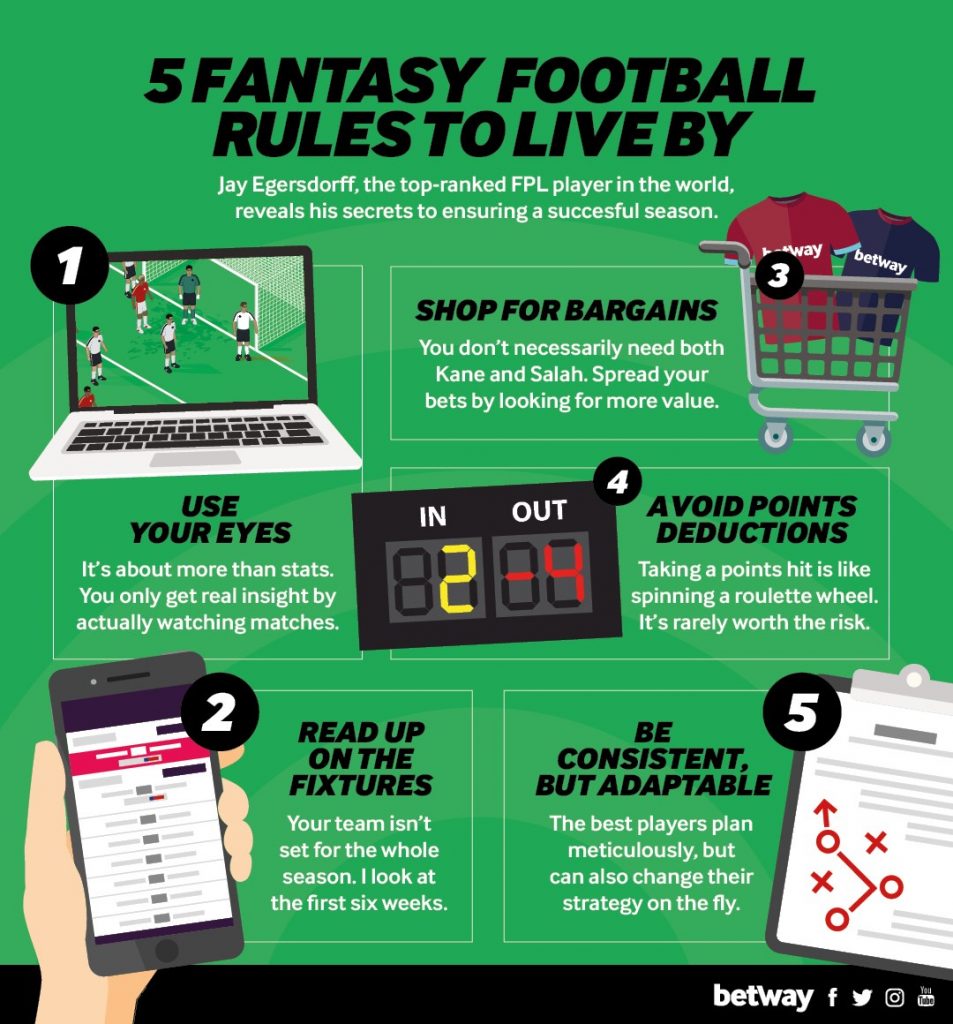 Jay on the players to watch:

“I’m looking at Wolves and Everton players. I think those teams will do well.

“Once we figure out who’s starting from those teams, I think they could have good seasons.

“Chelsea definitely need to spend money, and if they do then they are a team to watch for Fantasy. I also like the look of Danny Ings, Luke Shaw and Charlie Daniels. Cedric from Southampton is fairly well-priced, and I like Kenedy from Newcastle, who’s only £5m.

Jay on the players to avoid

“I’m avoiding players from teams like Huddersfield, Bournemouth and Watford, teams that have kicked around for a few years. Last season Stoke, West Brom and Swansea all went down after doing OK for a few seasons but not kicking on.

“The teams that come up often have a bit of momentum and dig in. The other sides that have been in the league for a while are under a bit more pressure.

“I also think Raheem Sterling might be a bit overpriced, and I don’t think you need to go for both Mo Salah and Kane at the start. What you want to do is find the next Kane and the next Salah, which is easier said than done!”

“I always go with strikers and attacking midfielders. There’s never a guarantee of a clean sheet, so no defender is ever worth captaining.

“It makes sense to go with a midfielder, because they have the most chances of getting points. They get clean sheet bonuses and one more point for a goal.”

Jay on how to use your chips

“Using your triple-captain on a double gameweek makes the most sense. Nobody has really mastered that strategy yet, though, as, even if a guy has two games in a week, you can’t guarantee they will play in each one.

“I think you need to hold on to the other chips as long as you can, too. They make sense to use when you’ve got more data behind you later in the season if you’re trying to make up some ground.”

Jay on how to use a wildcard

“I don’t think there’s an optimum time to play the wildcard. You need to see how the cards fall.

“Some people like to play their Wildcard really early, even after the first week. You have that option, if you’ve picked a bad team or if something goes drastically wrong. But, if you plan for the first six weeks, that gives you enough time to figure out if you want to stick with the team that you’ve picked.

“Sometimes you end up in a position where a couple of players get injured or someone gets banned. If you’ve already used your Wildcard then you’re stuck. If you save it, you’ve always got the chance to get yourself out of trouble.”