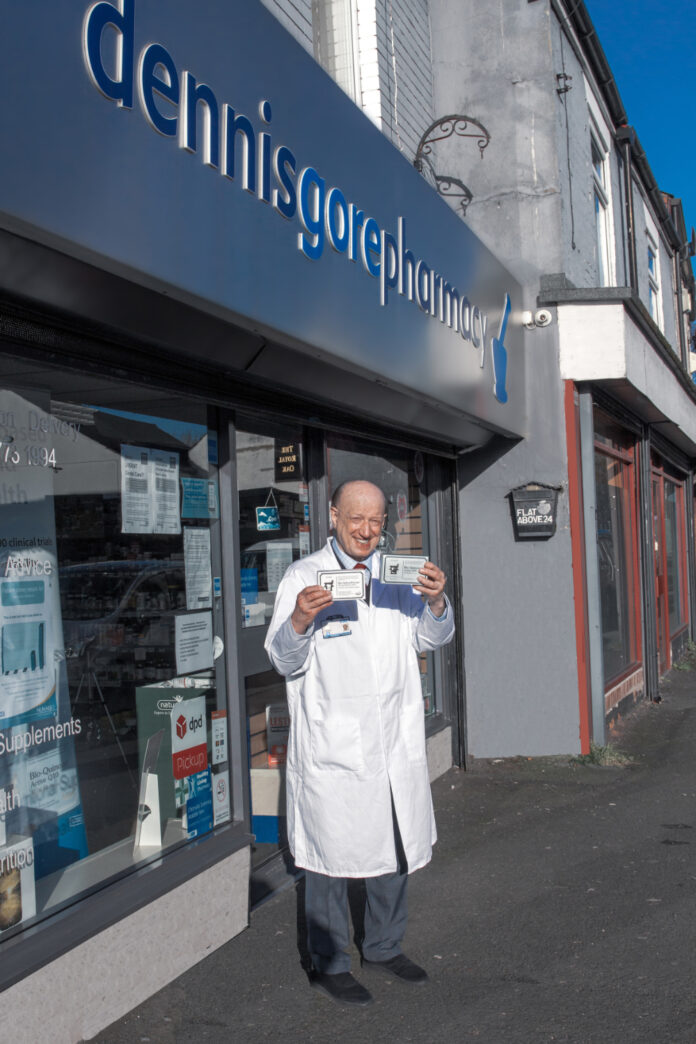 Dennis Gore, known to millions across the world as Dennis the Chemist and he is still working here in his pharmacy in Prestwich Manchester as he has for the last 55 years!

There can’t be many pharmacists still working in a community pharmacy at aged 80 in the land! But, along with two other fellow Pharmacists, Marc Borson and Mohammed Alam and a staff of 10, they are very busy with prescriptions (there Is a five Dr NHS practice across the road) but Dennis doesn’t stock the traditional chemist lines such as Christmas gifts, perfumes, make up, baby food, cameras. No, their speciality is health products which they obtain from all over the world and they have over 200, all of which are designed to help people maintain good health, and at the same time as taking their conventional medicines, whilst suffering from “A” for Asthma to “Z” for Zits!

Dennis qualified as a pharmacist after studying at John Moores University in the 1960s. He used to rock ‘n’ roll, whilst the Beatles were actually playing  in the cavern club in his lunch hour, which which was just down the road from John Moores. His pharmacy in Prestwich Manchester was opened by a pharmacist called Mr Brown in 1923 so in two years time Dennis is inviting everyone to come to their centenary celebration! When Mr Brown retired a Mr Shepherd took over and when he retired Dennis the Chemist took over in 1966! that’s 55 years ago and he is still there!

It was Fred fielder from the BBC (who was a frequent customer to the pharmacy )who enjoyed listening to Dennis giving advice in the shop to such a degree that this started his radio and TV career by getting Dennis on his weekly program and since then he has done many many programs. Over the years he’s been on BBC radio Manchester with Alan Beswick, James Stannage on Picadilly Gold, Julie Goodyear of Coronation Street fame, and has done many programs with the now very famous Claudia Winkleman (of strictly dancing fame ) when she was presenting afternoon programs on Granada television from Manchester and he’s even done programs with the film star, of Godfather fame, George Hamilton.

The pharmacy gets many requests for information on health problems – up to 20 a day and so people can receive, anywhere in the world, by mail order, products that they want to purchase for their health. The Royal Mail van comes to collect their sacks of parcels every day at 3:30pm Monday to Friday .

Dennis has done many many programs with the famous Pete Price who is on the radio program Liverpool live 247 and he is still doing a program with Pete every fourth Sunday at 10:30 p.m, and it was Pete Price who said, two years ago on his program “have you written your book yet before you die?! “And this has prompted Dennis to write a 200 page book with all the information of all the products so as to help people maintain good health. And he hopes to publish it in the next couple of months. All thanks to being prompted to write it by Pete Price!

Dennis came across a Danish Company, Pharma Nord, who were making all their health food products to pharmaceutical standards and Dennis, as a pharmacist, was impressed by such a high standard so he started to promote them on his programs. And,as a thank you, Pharma Nord has sent Dennis all over the world to many world conferences in Boston, Germany, Italy, London, Los Angeles, Prague, Belgium, Sweden, Seville, Bologna, New York and even to Lapland (to see a Berry from Mongolia and Tibet (used for dry eyes, dry skin, dry mouth and post menopausal dryness) processed into a capsule and taken to alleviate all these conditions. He has met many world authorities at these meetings.

As Dennis always jokes, he has never actually ‘been to work’ – the whole 55 years has just been like a hobby! Being able to help so many people. How many of us could say that about our job? Dennis’ underlying message is:-
“knowledge is power”.

Dennis’ chemist is Dennis Gore Chemist, located at 26 Whittaker Lane, Prestwich, Manchester, M25 1FX and and you can visit the website at www.dennisthechemist.com