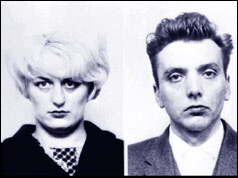 AUTHOR David Peace and former Manchester Evening News reporter Mikaela Sitford are taking part in an event looking at the legacy of the Moors Murders.

The event Oh Manchester… So Much To Answer For takes its title from a line in The Smiths’ song Suffer Little Children about Myra Hindley and Ian Brady and sets out to examine society’s fascination with violent crime – as well as the media’s continued obsession with it.

Organisers Ian Cummins of the University of Salford and Dr Martin King from Manchester Metropolitan University have argued that the sentencing of Hindley and Brady in 1966 created the world’s first celebrity serial killers as well as a template for the way in which the media reports these crimes.

The event will feature a recorded interview with David Peace, author of the Red Riding trilogy of novels, which were subsequently filmed and which follow the investigations into the brutal crimes carried out by Peter Sutcliffe – dubbed the Yorkshire Ripper.

Mikaela Sitford, who as a reporter for the MEN uncovered Hyde serial killer Dr Harold Shipman, will speak about the way in which the media reports violent crime.

Jean Rafferty, author of Myra, Beyond Saddleworth – which attempts to look at what Hindley would have been like had she been released from prison – as well as Professor David Platten, an expert in modern French crime fiction from the University of Leeds, will also contribute to the debate.

The event, part of the Economic and Social Research Council Festival of Social Science 2016, takes place at the MMU Brooks Building on Bonsall Street, Hulme, on Saturday November 12.

Ian Cummins, senior lecturer in social work at the University of Salford, said: “Manchester has reinvented itself as a financial, media and creative centre which now tops many lists of desirable international destinations – but half a century ago the eyes of the world were fixed on the city for very different reasons.

“Hindley and Brady set the tone for the way the media reports violent criminals, and helped create what the late criminologist Keith Soothill called the ‘serial killer industry’. It’s difficult to turn on the TV without seeing a drama about disillusioned police chasing a mass murderer, novels about these crimes top the bestseller charts and sadly Brady himself is only too aware of the media obsession.

“The focus is inevitably always on the killer and never on the pain and suffering endured by the victims’ families. This event is aimed at unpicking our fascination with serial killers and asking why we always unwittingly turn these horrific figures into celebrities.”

Tributes paid to “an independent and active pensioner”