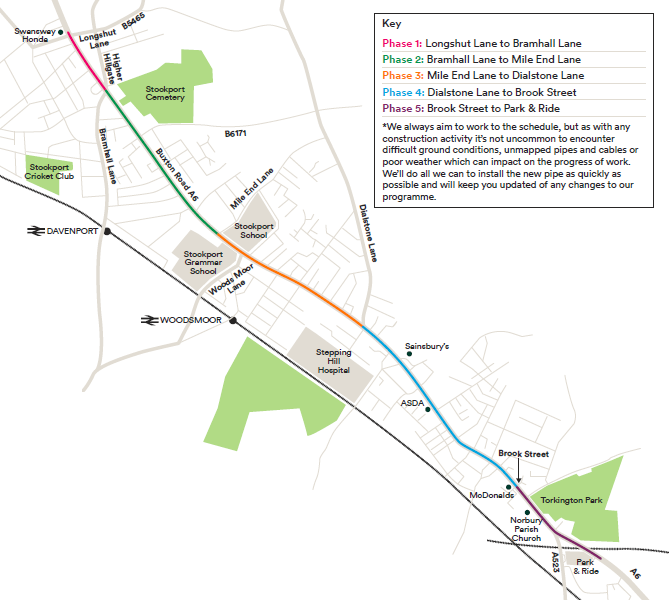 One of Stockport’s large water mains is set for a major re-vamp to improve and safeguard water supplies for thousands of people in and around south Manchester for decades to come.

Engineers working for United Utilities will install more than 4km of brand new durable modern lining inside the cast iron pipe under the A6 plus another half a kilometre of lining on some adjoining streets.

The £4.8m project began on Tuesday, April 6 at the junction of the A6 Wellington Road South with Longshut Lane West, in Shaw Heath.

It will then move southwards along the A6 in phases, finishing at the junction of the A6 Buxton Road with the Park and Ride, in Hazel Grove, in September. The Park & Ride will be kept open at all times.

Programme manager Christian Wheeler said the pipe, which measures 325mm in diameter, was important for local water supplies but had been prone to bursts in the past, causing disruption for householders, businesses and road users on several occasions.

“This work is essential but it’s taken a lot of planning so that we can do it without any impact on people’s water supplies and so that we minimise disruption for residents, drivers and bus users. The A6 is a key route so we’ve been liaising very closely with Stockport’s highways team and Transport for Greater Manchester.

“Inserting a lining into the existing pipe makes upgrading water supplies a lot quicker than the traditional method of digging up the whole road. We will need considerably fewer excavations at a few sites where we can push new sections of pipe in.”

A full overview of all phases of work is available online and local residents have been contacted direct with details of local traffic management provisions.

The first section of work will start in Shaw Heath on April 6 and will involve the temporary closure of one of the two northbound lanes on the A6 between Longshut Lane West and Bramhall Lane. This is expected to last up to ten weeks.

In consultation with the council, engineers will work through the night from the April 9 to the 13 to get across the junction of Longshut Lane West.

At the end of April another temporary lane closure from Higher Hillgate to the junction of Wellington Road South will be necessary.

Although there will be no road closures on the A6, there will be some side roads which will need to be temporarily closed. Diversions will be put in place.