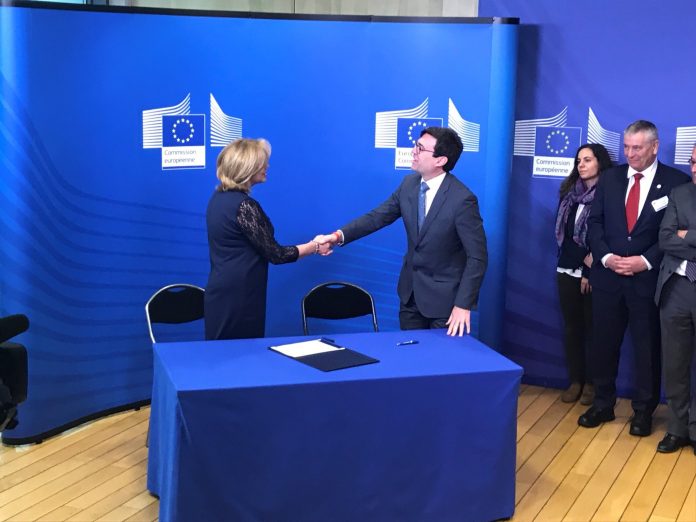 Greater Manchester has been chosen as part of the European Industrial Transition Pilot, which aims to give support to regions facing industrial transition.

Ten European regions will receive support under the pilot, which is still open to UK city-regions while the UK continues to be part of the EU and makes financial contributions.

Andy Burnham visited the European Commission to sign an agreement on the pilot with EU Commissioner Corina Cretu.

Commenting on the agreement the Mayor said:

“Greater Manchester has an unparalleled history as an industrial pioneer and I want us to lead the way again in building a 21st century economy.

“My vision for Greater Manchester is as the UK leading digital city and green city. This funding will help us to achieve that and implement the new thinking coming out of the forthcoming Green Summit.

“Through this pilot, we will be able to collaborate with other regions across Europe who, like Greater Manchester, are moving from an industrial past into a new dawn. As we prepare to leave the EU, it is essential that we maintain good links with our largest market. We should be building bridges rather than burning them.”

Greater Manchester will receive support from the European Commission of up to €200,000, which will be given to the city-region in April 2018, with a further grant of €300,000 the following year if progress is being made.

Corina Crețu, European Commissioner for Regional Policy, said: “Industrial transition is a major challenge for our economy and society. We need to find new ways to ensure that everyone everywhere can benefit from the opportunities of innovation and technological change.

“I am very glad that we will be working with 10 regions and two Member States to help them make full use of their strengths and potentials to embrace innovation, decarbonisation, digitisation, and to develop the skills for the future.”

Death of Stockport man is North Wales not deemed suspicious