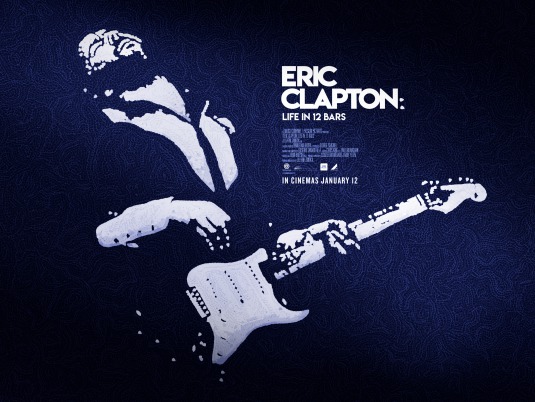 One of Britain’s most well known and loved musicians, Eric Clapton aka ‘Slowhand’, is the focus of a new documentary. Eric Clapton Life in 12 Bars is an in depth look into the former Yardbirds lead guitarist’s life and career. Sweeping through his early years, his rise to fame and his current standing in the world of music the film captures the highs and lows of a life which has produced some incredible music.

The press screening took place at the King Street Townhouse in Manchester where attendees shuffled into the comfortable and well designed screening room to be offered an early viewing of the film before its UK release.

The film, directed by Oscar winning producer Lili Fini Zanuck, captures the well regarded musician’s painful life in a way like never before. It is a story that has many story lines. Ones of death and darkness, a love triangle which lead to Clapton creating some of his best work and family issues from his early years amongst many more.

It sheds a light on his personality and his addictions through his life. Addictions that caused his career to spiral out of control and force him to leave the limelight for a substantial period of time. Reflecting on some of his darker moments, which were heavily fuelled by alcohol, Clapton says, “I was becoming chauvinistic and fascist too”.

Clapton also speaks of his trouble forming relationships with others, something that is heavily linked with the problems he faced as a child and teenager.

The film features many of Clapton’s musical peers and friends including George Harrison, BB King and Jimi Hendrix – all of whom held him in the highest regard.

There are no face on interviews during the documentary. The documentary is made up of photos and video from the time. The way the footage is edited creates a real authentic feel to the film.

The 134 minute look into Clapton’s life will bring out a number of emotions in its audiences. The reflection from the man himself with the wonder of hindsight and footage from old interviews and shows will take viewers on a deeply personal and traumatic journey.

Eric Clapton Life in 12 Bars will launch in UK and Irish cinemas on the 12th January 2018. If you want to see the film early you can purchase tickets to the premier showing at the Vue in the Printowrks plus other cinemas in the area on the 10th January here.