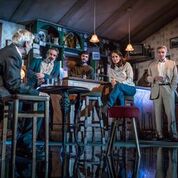 Winner of the 1997 Olivier Award for Best New Play, Conor McPherson’s chilling, modern classic The Weir embarks on a UK tour this autumn to mark its 20th Anniversary year.

In a small Irish town, the locals exchange stories round the crackling fire of Brendan’s pub to while away the hours one stormy night. As the beer and whisky flows, the arrival of a young stranger, haunted by a secret from her past, turns the tales of folklore into something more unsettling. One story, however, is more chilling and more real than any of them could have ever imagined.

A shadowy tale delving into the dark corners of human lives, The Weir is a co-production between English Touring Theatre and Mercury Theatre Colchester.

The production is the second to be toured to the Regional Touring Network an Arts Council England Strategic Touring consortium of 9 regional venues with whom ETT produce and tour high quality drama to venues looking to develop their drama audience. It follows the success of English Touring Theatre and Orange Tree Theatre’s production of Terence Rattigan’s French Without Tears which toured in autumn 2016.

Next generation of West End musicals face audiences for the first time in festival...