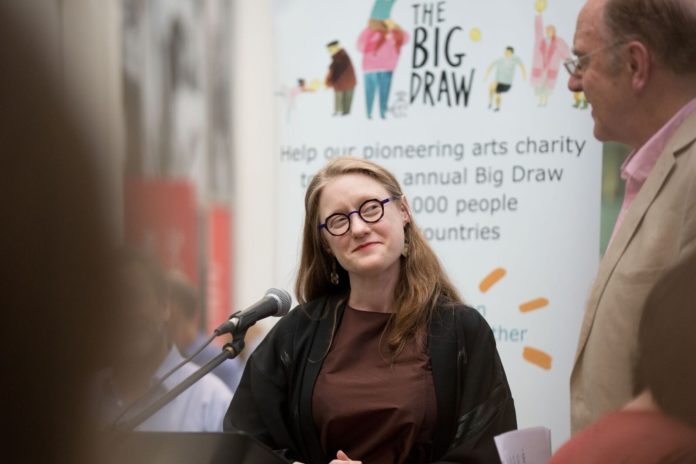 A Manchester Metropolitan senior lecturer has been selected as the first female ‘master’ of The Guild of St George, the charity founded in 1871 by the great Victorian thinker and writer John Ruskin.

As this year’s bicentenary celebrations of the birth of John Ruskin in 1819 come to a close, his charity, The Guild of St George, has selected its first woman to be master, the 15th in a line that stretches back to Ruskin himself.

Ruskin was a leading English art critic and a prominent social thinker and philanthropist.

Dr Rachel Dickinson, an English literature expert, is a distinguished Ruskin scholar and voluntary guild board member. She was elected by her colleagues on the board and her election was confirmed at the guild’s annual general meeting at the Sheffield Millennium Gallery in November.

Like Dickinson, previous masters have always been scholars and keen students of Ruskin, committed to the vision Ruskin espoused for the guild: that it would seek to make people’s lives better, principally through access to nature, art and the opportunity to develop skills and work that enhance the dignity and value of life without despoiling the earth.

Dickinson was already director of education for the guild, leading its efforts to use its assets, of land, art and the combined and varied expertise of its companions – its members – to pass on knowledge, skills and opportunities to new audiences and participants. She is committed to bringing these priorities to her time as master.

Among Ruskin’s pioneering concerns was an interest in the education and wellbeing of women. When the guild was first established, its key members were women and it was often women who supported his projects throughout his later years. The last decade has seen a huge increase in the number of female companions of the guild – almost half of the 305 – and in female academics worldwide who are researching and publishing about Ruskin. Dickinson’s appointment as the first women to be Master of the Guild is another significant moment for Ruskin studies.

Dickinson said: “Ruskin’s emphasis on education and actively being involved in arts, craft, and the rural economy – in protecting the environment, preserving skills and making beautiful things – is a message that really resonates today. I’m very excited about this opportunity to build on this tradition and work with others to help achieve Ruskin’s vision for a happier, healthier world.”

Dickinson is also a craftsperson. Inspired by Ruskin, she learned to spin yarn while working on her doctorate and this remains her main source of relaxation. Her textile-related expertise spans a lifetime, and a range of other crafts, including embroidery, knitting, dressmaking and bobbin lace, including making her own wedding veil.

She brings this unique combination of Ruskinian interests and skills to the challenge of heading a charity committed to improving people’s lives in the 21st century, just as its founder intended in his own time.

Central Library exhibition commemorates 100th anniversary of the end of the Battle of the...