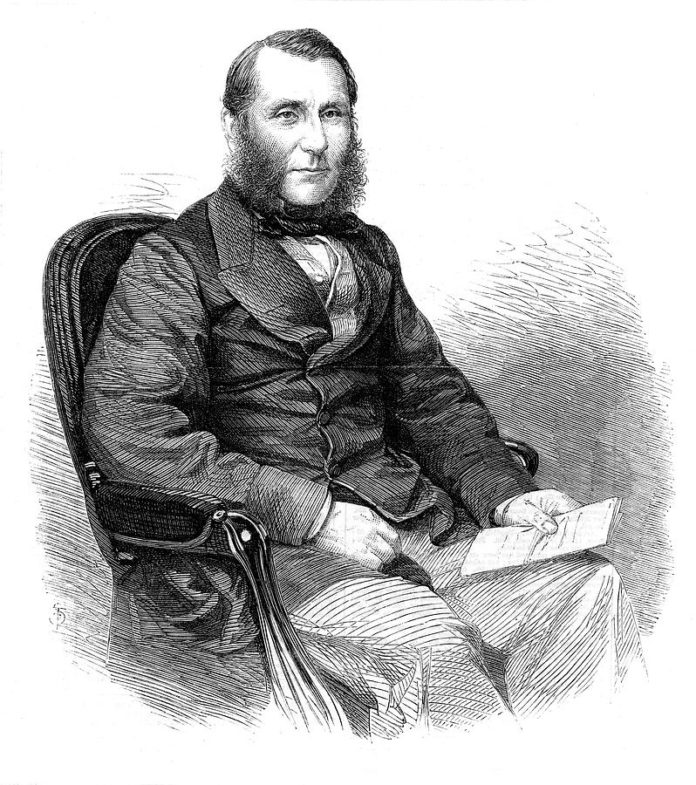 Ever heard of him? Probably not but Sir Edward Watkin was the unsung hero of railway engineering, who played a part in a number of momentous events in history.

Had things gone his way,he could have built the Channel Tunnel one hundred years before it finally opened

Now a new exhibition at Chetham’s Library has been put together by Geoff Scargill, Chairman of the Friends of Rose Hill and author of “Nimble Ned’ ,The amazing story of Edward Watkin, Manchester’s forgotten star”.

Born in Salford on 26th September 1819, the son of wealthy cotton merchant Absalom Watkin, who was noted for his involvement in the Anti-corn Law League.After a private education, he went to work in his father’s mill business.

he lived and died in Manchester. Newspaper obituaries appeared throughout the world, including The New York Times and the Sydney Herald but today Watkin is virtually forgotten.

From 1843 to 1846 he organised Saturday half day closing for Manchester businesses, campaigned for the first Parks for the People in Salford and Manchester and founded The Manchester Examiner newspaper.

In 1839 he organised an Anti-Corn Law campaign amongst factory and cotton mill workers. In 1867 he was one of 78 MP’s who tried to give women the vote. His Great Central Railway, opened in 1899, ran from Manchester to Marylebone in London. He developed Grimsby into the biggest fishing port in the world and created a holiday resort next to it, Cleethorpes.

He wanted to transform Ireland’s economy with a tunnel to Scotland. In 1880 he dug two miles of a Channel Tunnel before the government stopped him. He transformed the bankrupt Grand Trunk Railway of Canada into the start of the Canadian Pacific Railway, while being involved in the negotiations that led to the creation of Canada. In 1887 he said: “While Europe is becoming more and more one country by the breaking down of old fashioned ideas of exclusion we, in England, are becoming more and more isolated.”

By 1881 he was a director of nine railways and trustee of a tenth. These included the Cheshire Lines, the East London, the Manchester, Sheffield and Lincolnshire, the Manchester, South Junction and Altrincham, the Metropolitan, the Oldham, Ashton & Guide Bridge, the Sheffield and Midland Joint, the South Eastern, the Wigan Junction and the New York, Lake Erie and Western railways.

He is perhaps best known for being responsible for the building of the MS&LR’s ‘London Extension’ during the 1890s. Watkin saw an independent route to London as crucial for the long-term survival and development of the MS&LR, and as part of a grander scheme. His chairmanships of the South Eastern Railway, the Metropolitan Railway and the MS&LR meant that he controlled railways from England’s south coast ports, through London and (with the London Extension) through the Midlands to the industrial cities of the North.

He was also on the board of the Chemin de Fer du Nord, the French railway company from Calais.

His vision was for a Channel Tunnel coupled to a new main line to the north of England providing Sheffield, Manchester and Leeds with a railway to the Continent. The MS&LR changed its name to the Great Central Railway in 1892, and construction of the London Extension was completed by 1899. However, his plans for a Channel Tunnel ground to a halt soon after early excavations started due to both financial and political problems.

He is buried in St Wilfrid’s churchyard in Northenden, where a memorial plaque commemorates his life.