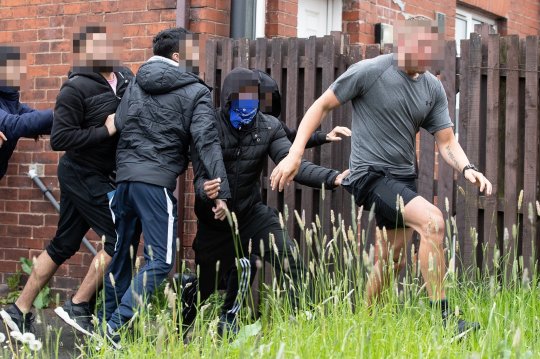 English Defence League Leader Tommy Robinson’s visit to Oldham today as part of his campaign for election to the European Parliament ended in violence.

Police vehicles were damaged after Robinson and counter-demonstrators clashed at a campaign event in Limehouse.

Eggs and bricks were lobbed from the crowds  but police say no one was seriously injured.

Earlier reports of a stabbing were dismissed as false by Greater Manchester Police who confirmed that only vehicles were damaged.

“It’s horrible to see our town being used for hate and division when our own future is a shared one, long after the circus has left town.”

Chief Superintendent Neil Evans, Territorial Commander for Oldham, said: “Everyone has the right to free speech and we will always do our best to facilitate this so people can exercise this right in a safe environment.

“This evening, people took advantage of this and turned to violence, throwing objects including eggs and bricks. We understand that many of those involved were not from Oldham.

“Whoever is responsible, this behaviour will not be tolerated by GMP, our partners or the people of Oldham.

“Police officers responded quickly to the disorder and dispersed those involved. Fortunately, no-one was seriously hurt and damage was only caused to vehicles.

“Now the incident has come to a close and people in the area have dispersed, our attention turns to the investigation into the circumstances that surround it. Those involved can expect to be arrested and dealt with robustly.

“There are a number of videos circulating on social media so we know that people have information that could be useful to us and I’d encourage those who have to get in contact with us.

“Patrols will remain in the area for some time for reassurance and to deal with any further concerns in the local area so, as always, please feel free to speak directly to officers.

“We are working very closely with our partners and communities and are determined that the cohesion in Oldham is not damaged by today’s events.”