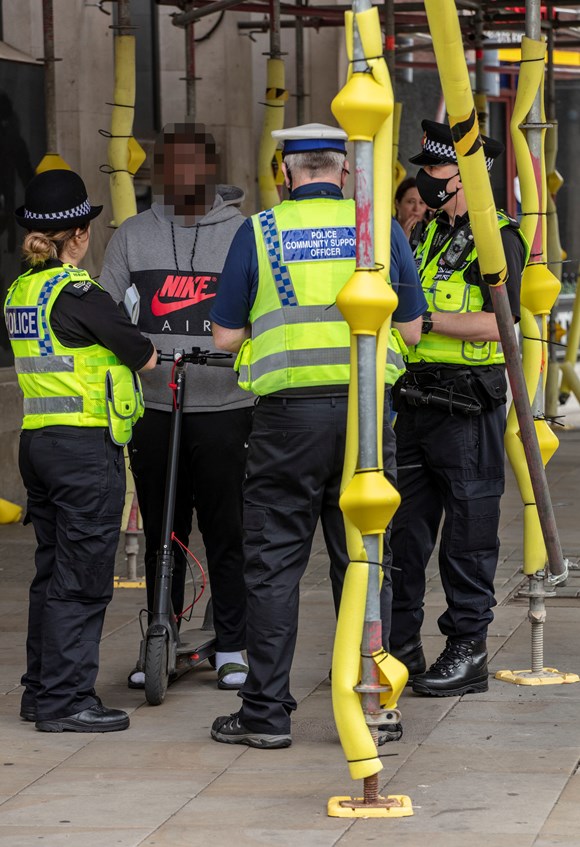 Yesterday, Thursday 8 July 2021, a team of 15 GMP officers, PCSOs and Specials undertook a one-day, proactive day of action in the city centre, to educate the public on the use of e-scooters and seize those which were being used illegally, to ensure everyone’s safety on public roads.

Although e-scooters are a great option in supporting more sustainable forms of transport, officers engaged with those using them illegally to remind them of the safety danger they can pose, particularly if used on pavements and designated cycle lanes.

During the day of action, officers seized 23 e-scooters that were being used illegally and educated members of the public on the regulations around e-scooters.

Inspector Jon Shilvock, from GMP’s Roads Policing Unit, said: “We are aware of the increase in popularity in e-scooters, however they are classified as personal light electric vehicles by the Department of Transport and as such the regulations for owning and using them must be enforced to ensure the safety of everyone using our roads and public footpaths.

“Today is not only about taking illegal e-scooters off the roads, but engaging with people and making sure they understand what the rules are. This was one targeted day of action in the city centre, however our officers will be remaining vigilant and taking the appropriate if and when they see e-scooters being used illegally in Greater Manchester, we will also be working with retailers to ensure they inform potential buyers of the rules surrounding e-scooter use.”