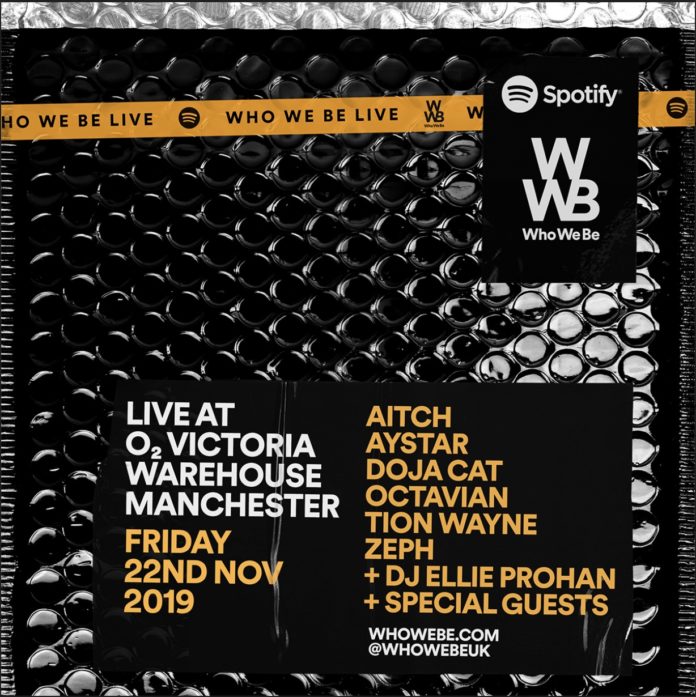 Celebrating the very best in Rap, Grime and R&B from the UK and beyond, this not-to-be-missed event sees Aitch, return to play in his hometown of Manchester.

Joining Aitch and Tion Wayne, the newly added acts represent some of the biggest names in home-grown talent and most popular acts from Spotify’s Who We Be playlist. Together Aitch, Tion Wayne, Aystar, Doja Cat, Octavian, and Zeph boast more than 800 million combined streams on Spotify.

Who We Be is curated by Spotify’s in-house urban music team and is the biggest urban playlist in the UK and Ireland, with over half a million followers.

2019 has been the year of Manchester-born rapper Aitch. Dropping career-defining singles such as Taste (Make It Shake), Buss Down and collaborating with the likes of Ed Sheeran, Stormzy, Jaykae, Young T & Bugsey, Aitch has cemented himself as one of the UK’s most exciting talents.

Liverpool rapper Aystar proved himself as one of the key figures in the Scouse music scene in 2016 when he released his mixtape Scousematic and appeared on Charlie Sloth’s Fire in the Booth. 2018 saw the release of ‘Scousematic 2’ and a number of collaborations with the likes of Suspect, Kingsley, Geko and more.

Doja Cat is an LA-based rapper and record producer who released her debut EP Purrr! in 2014. Doja Cat made a comeback in 2018 with her single ‘Mooo!’ which became a viral internet sensation. 2018 also saw the release of her debut studio album, ‘Amala’ and in 2019 Doja released a remix of her hit track ‘Juicy’ featuring Tyga.

Winner of BBC Sounds 2019, the south-east London raised rapper quickly rose to stardom with the release of his first official single, ‘Party Here’ in 2007. He has since released his first mixtape ‘SPACEMAN’ and collaborated with the likes of Mura Masa, Diplo and Skepta.

Having just celebrated his 9th year in music, North London based rapper Tion Wayne boasts a number of projects, from mixtapes to EP’s and has over 2 million monthly listeners on Spotify. Collaborating with NSG on one of the most popular hits of Summer 2018 and releasing his album, T Wayne’s World 3, Wayne showcases why he is a key player in the UK music scene.

One of Manchester’s hottest prospects, Zephaniah Cunningham who goes by the name Zeph, is a British rapper and songwriter hailing from Ashton, Manchester. His debut single ‘Prologue’ hit 100,000 streams on Spotify within a month and showcases why he is one to watch.

Ellie Prohan’s career as a DJ, TV and radio presenter has grown at an astounding rate. To date, the Persian DJ has already spun at some of London’s hottest venues including, The Jazz Café, Ace Hotel, Mahiki, 100 Wardour Street and Fabric, to name just a few.

The Who We Be playlist has grown substantially since it’s launch and is now the UK’s biggest Rap, Grime and R&B Playlist, with more than half a million followers. 2017 saw the launch of Who We Be Live – Spotify’s first-ever branded UK show.