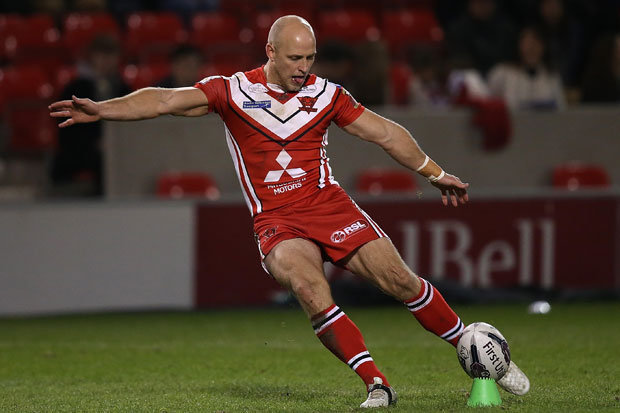 Michael Dobson is set to leave the Salford Red Devils at the end of the 2017 season to return to Australia with his family.

Dobson was not expected to play again this season due to needing an operation on a thumb injury sustained in the defeat against Wigan but this has now been confirmed as his last game for the Red Devils.

Dobson joined the Red Devils from Newcastle Knights back in 2015 and has helped Salford survive a Million Pound Game and guided the side to their first Challenge Cup semi-final for twenty years.

Dobson said: “I’ve been thinking about it for the last year and I’ve got a young family and it’s time to take the family home.

“I’ve been here for ten seasons now and we’re just ready to go back, settle down and take a step back from full-time rugby league and move onto the next phase.

“I’m going to play a little bit semi-professionally back in Australia and working within another club trying to get my foot in the door within the realm of coaching and development.

“I’ve loved it over here I’ve been here for ten years and, I’ll be honest, I never thought I’d be here this long but that’s probably why we’ve loved it so much.

“Obviously, I’ve loved the Salford Red Devils. We’ve had a hard three years but a good three years they’re a great bunch of lads and coaching staff here and the people who are involved with the club are great have been great, so it was a tough decision.

“Marwan’s ambition alongside the quality of players at the club was the reason I signed and since Ian Watson has come in everything’s really clicked and it’s made it hard to leave because of how close-knit we’ve become but, of course, family has to come first.”

Head Coach Ian Watson has coached Dobson for almost two years now and knows how important the Australian half-back has been to the Red Devils rise.

Ian Watson said: “Myself and Dobbo sat down in pre-season together to discuss the possibility of this being his last season due to him having a lovely young family, his wife Sally and two young boys, and he felt the time was right to take them back home.

“While we hoped Dobbo may change his mind his decision to take his family home is the right one for him but as a person, and a player, he will be greatly missed by both the coaching staff and the playing group here at Salford Red Devils.

“Dobbo is someone you can greatly rely on to commit 100% to the cause which is shown in the amount of respect he commands from the coaching staff and players. He has helped drive and install a fantastic work ethic within the team and club as captain.

“His attitude is one that doesn’t rely on his talents, which are obvious to see, but his desire and hard-working nature which rubs off on all the players around him. His professionalism and performances over the last couple of years for Salford have been a massive reason as to why we’ve progressed to being a top eight club.

“On a personal note, it’ll be sad to see Dobbo leave and I’d like to thank him as he has helped me massively as a young coach with the discussions and time we’ve spent together. I wish him and his family all the very best back in Australia and I’m sure we’ll see Dobbo be very successful in the future whether it be in a coaching position or any other ventures he wishes to pursue.”

Red’s squad for Wakefield is announced